5 Reasons why Delmon Young should win Rookie of the Year

Sometime this week, the American League will announce its 2007 Rookie of the Year. Barring any voting irregularities, the two front runners should be Boston Red Sox second baseman Dustin Pedroia and Tampa Bay Devil Rays right fielder Delmon Young. Although I believe Pedroia will probably win the award, I have challenged One More Dying Quail of the illustrious sports blog One More Dying Quail to give five reasons why the candidate on his beloved Red Sox is more worthy than the candidate on my local nine.

1) Consistency – Despite being only a rookie, Delmon Young played in all 162 games in 2007, being only one of two players to do so. Even if you add Pedroia’s 14 postseason games, Young still played more games in the 2007 season. This consistency in Devil Rays’ season of flux (or general misery, if you prefer) not only allowed Young to tally the second most at bats in the American League but undoubtedly made manager Joe Madden’s job a bit easier.

2) Clutch hitting – In leading all AL Rookies in RBIs with 93, Young hit a whopping .349 with runners in scoring position. Whereas many other Rookie of the Year contenders in the AL bounced around their respective lineups, Young spent a majority of his season in the 5th spot in the Devil Rays lineup.

3) Versatility – In order to fill the Devil Rays injury-depleted outfield, Young moved into center field for a month. Although far from spectacular, Young provided much needed flexibility in a time of crisis. Among leading AL rookies, only Reggie Willits of the LA Angels played more games at a different position than Young.

4) Fielding prowess – Delmon Young was one of the best fielding right fielders in the American League in 2007. Young’s 16 assists were 3rd in the league among RFs and, according to ESPN.com, Young’s range factor (Range Factor ((PO + A) divided by innings) was 4th best among AL right fielders. And according to the fine gentlemen of Thunder Matt's Saloon, he should have won a Gold Glove. Unfortunately however, the Gold Glove is awarded to three outfielders, not necessarily a center fielder, a right fielder, and a left fielder.

5) Overexposure – Last but definitely not least, hasn’t Boston won enough already? Allowing Pedroia to win AL Rookie of the Year would continue the collective arrogance of Red Sox Nation. Haven’t we seen enough of the Red Sox for one year? Hopefully, the voters give the Rays fans something to cheer for besides Kevin Costner concerts and Fred McGriff’s endorsement of the new uniforms, his first major public endorsement since the 1989 Tom Emanski videos*. 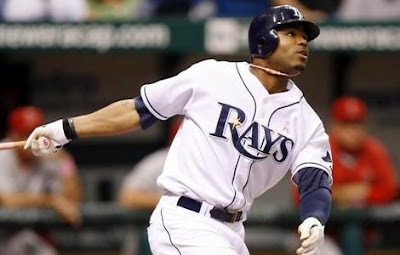 This is a post I wrote for Jay Busbee's Sports Gone South website. That site is now closed, so I figured I would put the post here.

With Jay on a weeklong pilgrimage, I have once again been summoned to tug your heartstrings, be still your heart, and get you all doey-eyed for a bunch of men running around playing a modernized game of rounders.  This time however, instead of trying to win you over to the dark side of those hated New York Mets, I’m going to stay a bit more regional. Today, I am going to make you love the Tampa Bay Devil Rays.

Admittedly, in the first ten years of the team’s history there hasn’t been much to love about the Devil Rays.  Horrible ownership, atrocious personnel, embarrassing off-field incidents, and home games in a dungeonesque former hockey arena quickly made the Devil Rays the biggest American League joke this side of Kansas City.  Two recent events however, have ushered in an era of optimism in the organization.  Although some players have been known to still “act the fool”, new ownership direction in 2005 and the fleecing of the New York Mets to acquire ace Scott Kazmir have given hope to the fine denizens of the Tampa Bay area.

So without further ado, I present to you five good reasons why you should fall madly in love with the Tampa Bay Devil Rays.

They are not the Yankees or the Red Sox

Due to Tampa Bay’s proximity to the Atlantic Coast, the Devil Rays have been mired in the American League East since their inception.  Unfortunately, this division has been the stomping ground of two of the most evil empires in sports: the New York Yankees and Boston Red Sox.  These two teams, with their astronomical payrolls and ESPN exposure, are the Goliaths of the baseball landscape.  So who better to topple these juggernauts than the newest, most up-start ballclub in the division? Hey, if the Osceola Rangers can topple the Yankee invaders in 1862 , why can’t the Devil Rays 145 years later?

Faster than a speeding bullet, more range than a locomotive, and able to leap and rob opponents of home runs, Carl Crawford is the face of the Tampa Bay Devil Rays.  At only 25 years old, Crawford is already the Devil Rays franchise leader in hits, runs, singles, and sacrifices.  He has also led the American League in triples each of the last three years and stolen bases three out of the last four
years.  Didn’t know that?  You would if you bled Devil Rays green.

James Shields, Andy Sonnanstine, Jason Hammel, Jeff Niemann, David Price, and the aforementioned Scott Kazmir. These names and several others represent the future of the Tampa Bay Devil Rays pitching rotation.  And the future looks bright. With any luck, the Devil Rays’ young guns could be the next Glavine, Smoltz, Avery, Mercker, and Millwood.  Or at least the next Willis, Johnson, Olson, Sanchez, and Nolasco.

Although more famous as an elephant graveyard for retirees nationwide, the Tampa Bay area is also well-known its cornucopia of gorgeous women.  Think Miami, without the pretentiousness.  From the Original Hooters in Clearwater to the University of South Florida to Tampa’s bevy of adult entertainment establishments, proverbial “eye-candy” are everywhere.  Even at Tropicana Field.  You never know, you might even spot area resident and Florida State Cowgirl Jenn Sterger.

Warmer than the former Leningrad

Even though they are known as the Tampa Bay Devil Rays, the Tampa Bay professional baseball club actually plays its games across the bay in St. Petersburg.  According to World Travels.com, the average temperature in St. Pete, Florida is at least 40 degrees warmer than the average temperature in St. Pete, Russia .  So when deciding between the Devil Rays and the St. Petersburg Spartak of the Russian Basketball League, remember, sunshine, beaches, and bikini-clad women beat parkas, blizzards, and frostbite any day of the week.  And usually twice on Sundays.
on June 17, 2007
Email ThisBlogThis!Share to TwitterShare to FacebookShare to Pinterest
Labels: TAMPA BAY RAYS

256.25 schillings will get you a ticket to the Hall of Fame

In introducing his recent ESPN.com article on the staying power of baseball's most senior pitchers, writer Sean McAdams makes the assumption Boston Red Sox right-hander Curt Shilling is a future baseball Hall of Famer. But is that true? I am not so sure.

Curt Schilling has been a good, if not great, pitcher since 2001. He has won 20 games or more three times, pitched over 200 innings four times, and averaged over a strikeout an inning. Now, although I am far from a baseball statistician, those are Hall of Fame caliber numbers. Add to the fact Schilling started this run in his mid-30s and his accomplishments become all the more impressive.

However, when judging a player's Hall of Fame potential it is imperative to examine his entire body of work. Schilling has pitched in the major leagues since 1988. During that time, he has won over 10 games only 10 times, the same amount of times as Dwight Gooden and three times fewer than David Wells. Gooden's Hall of Fame chances are pretty much nil and Wells will not be considered a serious Hall of Fame candidate anywhere outside of the Bronx. For his entire body of work, these are Curt Schilling's contemparies.

Of the other elderly hurlers McAdam discusses (Roger Clemens, Greg Maddux, Jamie Moyer, Tom Glavine and Randy Johnson), Clemens, Maddux, and Johnson are sure-fire future inductees. Glavine will join them, but I believe he needs to get his 300th to solidify his candidacy. That should happen in 2007. Moyer, although he has pitched effectively with a high-school fastball since the days of Willie Mays, has never had Hall of Fame numbers.

Not to campaign for Dwight Gooden, but I don't believe Curt Schilling will be able to put together a resume fit for the Baseball Hall of Fame when he retires. If he ever retires.