Did the Cowbell Kid hurt the Rays? 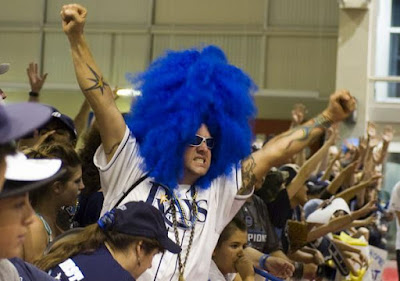 Normally, I like the Cowbell Kid. He is the ultimate cheerleader. He has excited Rays fans for many moons with his eccentric personality, his wild hair-dos, and his persistent cowbell banging. He is an icon among Rays fans.

On October 20, the Cowbell Kid made his first World Series video. For nearly four minutes the Cowbell Kid talked his drivel about how great the Rays were and how the World Series was just a "formality" after the Rays beat the Red Sox in the ALCS. He then predicted the Rays would win the Series in 5. Unfortunately for Rays fans, the opposite was true. Strike 1, Cowbell Kid.

On October 24, the Cowbell Kid made a video of himself on the toilet, spewing trash talk about the Philadelphia Phillies. In this video, which has since been removed from YouTube, the Cowbell Kid made fun of Phillies slugger Ryan Howard, who at that point had not hit a home run during the postseason. After the Cowbell Kid's video, Howard hit three home runs against the Rays, including two in Game 4 of the World Series. If there was ever an example of letting a sleeping dog lie, that was it. Strike 2, Cowbell Kid.

Lastly, on November 2, the Cowbell Kid showed up on yet another video, this time ridiculing Phillie fans and linking them all to all social disturbances that occurred the night the Phillies won the World Series. Another poor showing. In this video, the Cowbell Kid proclaims that he is glad the Rays lost, so the world can see that all Phillie fans are horrible, "homeless, soup-kitchen dwellers". I am going to go out on a limb and say that is not true. This blog has been linked to by sites of Phillie fans, who might I add, happened to be pretty cool people. Strike 3, Cowbell Kid.

By making videos like this, The Cowbell Kid is showing the worst of Rays fans. As the video ambassador to the Rays, he is displaying Rays fans as classless, arrogant, and sore losers. For an organization that had enough negativity surrounding it for the first 10 years of its existence, the Rays don't need the Cowbell Kid undoing all their positive work. Here's hoping 2009 brings a more mellow and more mature Cowbell Kid. One who doesn't provide the opposition and their fans bulletin board material.
on November 02, 2008
Email ThisBlogThis!Share to TwitterShare to FacebookShare to Pinterest
Labels: Essays, TAMPA BAY RAYS
Newer Posts Older Posts Home
Subscribe to: Posts (Atom)