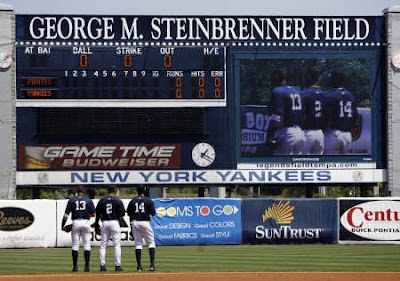 The first leg of this year's Spring Training tour took me to George M. Steinbrenner Field in Tampa, Florida. For whatever reason, even though this is the closest park to my place, I had never been to The George.

(Note: They don't actually call it "The George". I made that up.)

Before I begin, however, I have to say that the ticket office at Steinbrenner Field is incredibly rude. That's a whole other story in itself, but suffice to say, I went to get a ticket the day before the game and they did not give me a good first impression. So if you ever go, you have been warned.

Another note: limited bicycle parking (read: none). Because Steinbrenner Field is so close (appx 5-6 miles) from my place, I decided to ride my bike. It had been a while, so need some exercise. Not a bad ride, except for the fact that a few spokes broke on my wheel and I had to walk the bike home. But again, that's a whole other story. So anyway, I had to lock my bike to a handicap parking sign and have a security guard promise he would watch it. At least someone at The George is customer friendly.

Before I get to the game itself, I want to pitch an idea to each and every concession stand at each and every event (sports, concerts, etc): SELL BATTERIES! I took two pictures before my camera ran out of juice. I was not going home to get more batteries. I was ready to dish out whatever the cost to take more pics, but they don't sell batteries at The George. Their loss.

Today's lineups had the usual spring flavor. The Yankees were playing most of their starters, save for Jorge Posada. The Twins featured far less big names, as neither Justin Morneau nor Joe Mauer played. But they did play Delmon Young and the great Nick Punto, who in 2007 was 23.4 calculated runs worse than a replacement-level player (that's baseball geek-speak for "he was beyond terrible").

To use the cliche, the Twins struck early and often, posting 2 runs in the first, 1 in the second, and 3 in the third. Whether prescribed or not, Joba lasted only 1 inning. The Yankees matched the Twins through the first two innings, but fell behind 6-3 after 3.

Sidenote: I've come to the conclusion that jeering A-Rod and the rest of baseball's Steroid Squad (another term I made up), is a lot like jeering a pro wrestling heel. One of the most common accusations a "bad guy" wrestler gets is that he is a "cheater". The biggest difference, however, is that when the heel chokes his opponent, it is part and parcel of the show. A-Rod's steroid dalliance, on the other hand, was more than an act, it was a slap in the face to baseball. And so, to paraphrase "The Princess Bride",

Alex Rodriguez: Why do you do this?

Jordi: Because you had greatness in your hands, and you gave it up.

Alex Rodriguez: But they would have ignored me if I hadn't done it.

Ok, one more sidenote: The George P.A. played The White Stripes's "Seven Nation Army" in the middle of the sixth. I wonder if they conveniently swiped it from the Rays, who were playing it every game towards the end of last season (credit for the idea goes to The Professor over at Rays Index).

Back to the game:

Twins won 7-4. Read about it there, I written too much and said too little. I'm done.

Ah, springtime in Florida. It is that magical time between the brisk chilling hours of winter and the barely-there bikinis of summer. It is a time of perpetual 75-degree weather, before tourist season but after the snowbird exodus. It is a time for baseball. A time for warm-ups and wunderkinds, for reclamations and rejuvenations. And most importantly, it is time for another tour of the Grapefruit League.

So far I have visited seven different spring training facilities in the last two years. I have been to Clearwater (twice) to see the Phillies, Melbourne Viera to see the Nationals, Lakeland to see the Tigers, Sarasota to see the Reds, Dunedin to see the Blue Jays, Bradenton to see the Pirates, and Winter Haven to see the Indians.

Then, of course, there was my trip to the Trop to see the then-Devil Rays take on the Mets in an exhibition.

This year I intend on continuing this glorious tradition and visiting spring training facilities throughout Florida.

This year's itinerary should (no guarantees) include:

That's six games and four more stadiums checked off the list. If I go to all these games, the only home teams I'll have yet to see are the Red Sox, Marlins, Cardinals, and Orioles.