Where are Carl Crawford's triples? 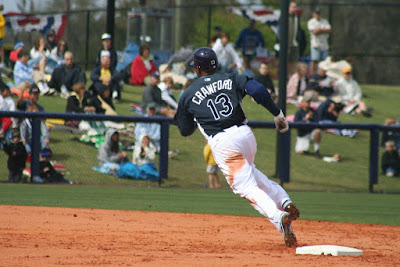 I was looking at the Rays stats this year and outside of the regular abnormalities (Upton's low BA, Sonnanstine's ungodly ERA), I noticed something very strange. Carl Crawford had only 3 triples.

This from a guy who is one of the most prolific triple-hitters in baseball history. Since his rookie season Crawford has averaged 12 triples a year. That's one every 48.26 plate appearances. Yet so far in 2009, Crawford is averaging one triple every 88.67 plate appearances. At this rate, Crawford will end up with his lowest total since his first season.

My first thought was that perhaps he is sacrificing triples for the sake of stealing third. After all, Crawford leads baseball in stolen bases. Yet Crawford only has one steal of third following a double, April 30th against Boston.

Ok. What else could it be?

Here is a breakdown of Crawford's 11 doubles as of June 10th:

1) April 7th vs. Boston
Top of the 6th off Josh Beckett
Double to LF (Line Drive to Deep LF-CF); Iwamura to 3B

2) April 10th vs Baltimore
Top of the 1st off M. Hendrickson
Double to RF (Line Drive to Deep RF Line); Crawford out at 3B/RF-2B-3B

8) May 9th vs Boston
Top of the 7th off Javier Lopez
Double to LF (Fly Ball to Deep LF); Upton to 3B

So what do we have?

That's nine. Leaving us with two doubles that perhaps could have been turned into triples (April 15, May 12 #1).

April 15th vs New York
With 2 outs, Crawford hits a line drive to deep RF-CF, driving home BJ Upton.
Idea why he didn't try for a triple: following Crawford was new acquisition Pat Burrell. The Rays had tagged Pettite for two consecutive doubles. Maybe Crawford didn't want to make the 3rd out at third with the big free agent slugger coming up.

May 12th vs Baltimore
With one out, Crawford doubles to deep RF-CF.
Idea why he didn't try for a triple: Perhaps the arm strength of Orioles RF Nick Markakis? Maybe Orioles CF Adam Jones got to the ball quickly?

So after going through Crawford's doubles, we really still haven't found the reason he is behind on his average triples rate. Perhaps it is situational and he hasn't had many opportunities to fly around the bases. Perhaps he is being injury cautious. Or perhaps his line drive rate is down, or maybe he isn't getting the jump out of the batter's box like he used to.

Overall, like Rays victories, Crawford triples have unfortunately been too few. Here's hoping both increase in bunches as the season progresses.
on June 10, 2009
Email ThisBlogThis!Share to TwitterShare to FacebookShare to Pinterest
Labels: TAMPA BAY RAYS

I just got back from seeing the Rays play the Royals. Almost as if by divine calling, Southern Thunder Matt Joyce not only broke the game open with a two-run double in the 6th, he also hit a towering moonshot to deep right field in the eighth. Overall, not a bad day at the office for Southern Thunder as he went 3 for 4 with four runs batted in.

As I mentioned in the opening, Southern Thunder provided a game-winning, clutch two-run double to propel the Rays to victory. But if popular wisdom ruled, it would not have been. Thankfully Rays manager Joe Madden doesn't play by "the book". With the game on the line and two out in the sixth, Royals skipper Trey Hillman brought in his loogy (lefty one out guy), veteran left-handed hurler Horacio Ramirez to face Southern Thunder. There was no doubt nearly everyone in attendance thought Southern Thunder would be pinch-hit for. I'll admit, I almost expected it. But Madden was a believer. And Southern Thunder came through. Then again in the eighth, as he added Royals righty Roman Colon to his list of home run victims.