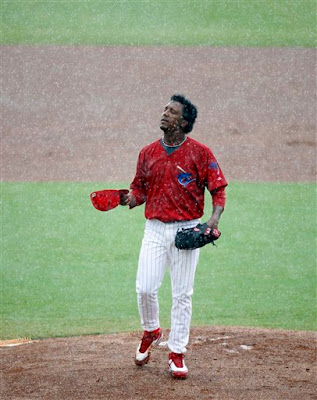 One of my favorite movies is HBO's 1996 original Soul of the Game - the story of Negro League stars Jackie Robinson, Josh Gibson, and Satchel Paige and their struggle to brake baseball's color barrier and be the first African-American to play in the Majors. It is the story of the young Robinson and his relationship with the older Paige and Gibson and their reactions as the former gets the call the latter two feel they deserve.

In the movie, as well as in reality, time unfortunately was not on the side of Satchel Paige, who although he eventually received a big league opportunity, was far beyond the peak of his career. But Paige would not let his age or his diminished ability deter him from his goals of making it to the bigs, milking and cajoling his arm in the desperate hope that it still had a few good innings left.

I saw a lot of the Satchel Paige character as I watched Pedro Martinez pitch for the Class-A Clearwater Threshers on Sunday. Martinez, signed by the Phillies a few weeks ago, was clearly not the Pedro of old and I could tell he knew it. The 97 mph fastball was long gone, the aura and mystic was fading, and he was fighting to prove his ability to merely contribute. The former Cy Young ace was now a conjurer, a Merlin of the mound, hoping his knowledge, guile, and a little bit of smoke and mirrors was enough to make it back to the Show.

Sadly, I don't think it was. In his first start against live batters since the World Baseball Classic, Pedro threw 1 and 1/3 innings in a rain-shortened game against the St. Lucie Mets. As it was the major league Mets who put him out to pasture after last season, the minor league Mets put the final nail in his legendary career. Although I didn't expect Pedro to dominate, it was clear he was struggling. Most of his pitches were up in the zone, the Mets were getting good wood on the ball, and he only produced one swinging miss, albeit on a classic Pedro change-up. The box score will say Pedro didn't do that badly, giving up one hit, hitting a batter, and striking one. But great change-up aside, I'd say his tank is empty.

There is another scene in Soul of the Game when after an exhibition against major league all-stars is rained out, the Josh Gibson character stands in the downpour and yells up to God, knowing full well the rain closed the door on his last chance. I saw a lot of the Josh Gibson character in Pedro as the umpires motioned for the players to clear the field. While the younger players scampered past him to shelter, Pedro Martinez slowly walked off the mound, tipping his cap to the many fans who came only to see him.

I have been a Pedro Martinez fan for a long time, and I don't hope this is true, but I wouldn't be surprised if Sunday was the last day of Pedro Martinez's brilliant baseball career.
on July 26, 2009
Email ThisBlogThis!Share to TwitterShare to FacebookShare to Pinterest
Labels: CLEARWATER THRESHERS
Newer Posts Older Posts Home
Subscribe to: Posts (Atom)