When Tis Noble to Boo 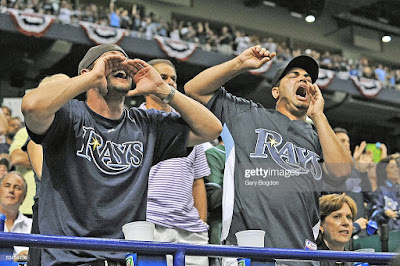 There is a well-worn cliché that baseball is a game of failure. It is a game where even the greatest hitters of all-time fail in more than 60% of their attempts. It is a game where most teams lose 33% of their games and there are years when 50% is better than average. And even though our local nine are in stride for five score victories and one of the greatest seasons in franchise history, they too have tasted the flavor of failure.

During those infrequent moments where all is not well in The Dome of the Great Orange – when the jaws of victory slacken and defeat escapes, briefly allowed to run wild before being embraced like a stray feline – there often grows a murmur of discontent among the viewing masses. From the party deck of the proletariat to the box seats of the bourgeois comes a sound most frequently reserved for the enemy. A sound that when spelled out looks similar to a Halloween surprise. But for the fans it means something far different, it means a nightmare of a sight they would rather not have seen. It means the rancid smell of losing and its agonizing stench has permeated not only the nasal cavity but the entire cranial cortex.

To paraphrase the modern day poet DMX, losing makes fans lose their mind and act the fool, act the fool.

But why? Why do people who claim their heart beats true for the Rays unleash a bevy of boisterous boos at the first sign of failure, especially if they know failure is an inherent part of the game?

Many, many moons ago, before the Rays, before Evan and Carl, before baseball, before The Babe and Ty Cobb, and even before America, before Honest Abe and George Washington, there was a group of London-based fans called “the groundlings”.

The groundlings – lower case “g”, mind you, not the 1980s comedy troupe of the same name – were the poorer members of society and as an escape from their daily rigmarole, would frequent the playhouses of the day. Unfortunately, however, the groundlings weren’t the most behaved bunch nor were they the most educated. They would boo and jeer and often miss the nuances, the plays on language, and subtleties of a performance. According to Henry Crosse, a religious spokesperson of the day,

“…the commonest haunters are for the most part, the leaudest persons in the land, apt for pilferie, periurie, forgerie, or any regories, the very scum, rascallitie, and baggage of the people, thieves cutpurses, shifters, cousoners; briefly an uncleane generation, and spaune of vipers…for a play is like a sinke in town; whereunto all the filth doth runne: or a byle in the body, that draweth all the humours into it.”

According to the all-knowing Wikipedia, the groundlings would even throw food at characters they did not like, similar to how fans of the Insane Clown Posse recently treated singer/celebrity Tila Tequila.

The answer to these questions is simple. The groundlings acted for the same reason fans boo players at Tropicana Field. Because they were emotionally invested.

For all its numbers and stone cold analysis, baseball is an emotional game. It might lack the physical contact of football, the constant motion of basketball and soccer, but what baseball lacks in action, it makes up for in suspense. The entire game watching experience is hinged on the epic showdown between pitcher and batter. Both players and fans ride a growing wave of emotion through every pitch, every at-bat, and every inning until the final out is recorded.

Players use the wave of the game for different purposes. Emotion from the first pitch fuels Jonny Gomes’s passion and desire to play with reckless abandon. The ability to surf atop the wave and use it for his own advantage is why Rafael Soriano appears as calm as he is.

The growing suspense of baseball affects fans as well. It is the reason they cheer more for the last out than the first. It was the reason 43,000 Houston Astro fans were suddenly silent after seeing Albert Pujols launch a Brad Lidge slider deep into the night sky on October 15th, 2005.

Fan response can also be viewed through the spectrum of basic crowd psychology. Many spectators are easily influenced by their fellow fans. This is especially true for drunks and children. If a father boos, his son or daughter is likely to follow suit, seeking affirmation through imitation. Drunks, of course, are easily impressionable in their own right. All it takes is one to boo and the others, not wanting to be left out, will gleefully join the cascade of negative expression. The children might not know better and the intoxicated attendees might regret it in the morning, but for that instant – that one moment in an inning in a game in a 162-game season – booing feels right.

Proximity to the action is also a factor in crowd response. The closer fans are to the action, the less likely they are to remember the big picture. Like an infantry soldier on the front lines who sees the battle and hears the bullets flying by his ear or an aforementioned groundling, who is pressed and packed into the front rows of the great theaters of yesteryear, those at the place of the action often lose the larger perspective. They often stare transfixed on one single tree, forgetting the form of the forest.

There are also fans who boo due to unfulfilled expectations. If a fan expects Evan Longoria to hit a home run every at bat, they may boo if he only hits a triple. Such actions are of course highly suspect and lack any knowledge of baseball reality, where home runs are not frequent and failure is the nature of the beast, but they could occur. A man from Mars or any other visitor unfamiliar with the game could want to see home runs and nothing else. They paid their money with those expectations and have hinged their dollars to their desired outcome.

Unfortunately, there are many analysts out there in the baseball community who take offense to fans booing home team players. Although they consider the human element for players as a caveat to any errors in statistical analysis or process, they do not allow for a shift in the overall psyche of the crowd. Just as an all-night bender could affect a player, conditions such as traffic, the weather, the economy, alcohol, or a bad day at work could affect how a fan reacts to the actions on the field. And, as I mentioned, when it comes to boos, one drip could easily start a flood.
on September 05, 2010
Email ThisBlogThis!Share to TwitterShare to FacebookShare to Pinterest
Labels: Essays, TAMPA BAY RAYS
Newer Posts Older Posts Home
Subscribe to: Posts (Atom)