A scientific categorization of the inhabitants of Tropicana Field

Greetings, I am not a scientist, I am just attempting to write like one.

In the last year I have been witness to a new type of species dwelling in the area of St. Petersburg, Florida. Although many deny their existence or claim they do not reveal themselves often enough for believability, I have seen them too often to think that they are not real. Through dozens of visits to the area and tireless observation, I have decided to take on the responsibility of document this new phenomenon for scientific prosperity.

The sun bears down on Tropicana Field, yet inside the 18-year old establishment the temperature is a cool, constant 72 degrees. A baseball field lay in the middle of the building and although some would say that is where the action is, my observations tell a far different story. It is in the stands surrounding the baseball field where these new, exciting, boisterous, charasmatic creatures dwell.

From my perch in the upper deck I can see most of the stadium. The only area outside my view is a small area beneath me, an area marked by announce booths and luxury boxes - hardly the subjects of study. More often than not I am surrounded by the beasts. They consume me and smother me with sounds of cowbells and voices. Led by a fuzzy whatchamacallit named Raymond, they call themselves "Rays' Fans" and have outshouted or drowned out every invading voice in Tropicana Field this year. 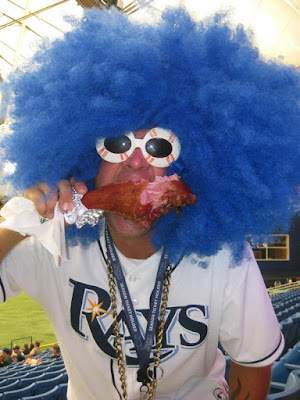 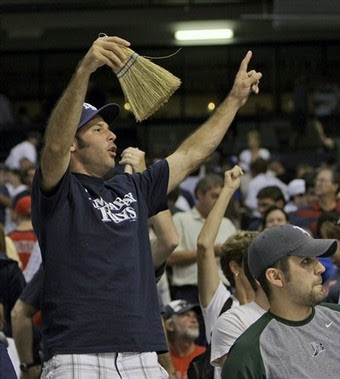 Here you see a few examples of "Hotchickitus Rays Fanicus". Although Hotchickitus inhabited Tropicana Field before 2008, never before has the species been seen in such large numbers. 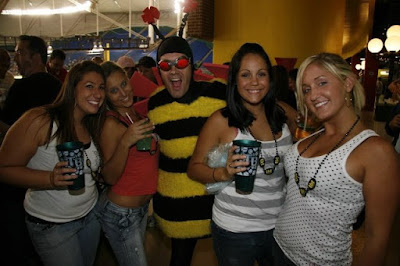 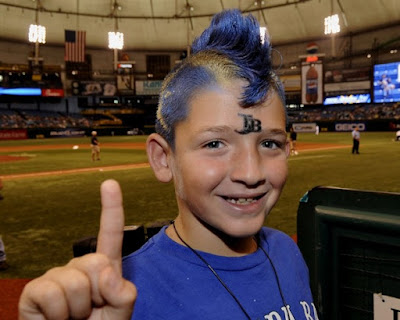 This study inspired by Deadspin.com.
on July 28, 2008
Email ThisBlogThis!Share to TwitterShare to FacebookShare to Pinterest
Labels: TAMPA BAY RAYS

The Return of Thunder

When the Oakland A's traded pitcher Rich Harden, I did not think it would affect me in the least. I'm neutral on Harden and the Rays had already finished playing their season series against the Cubs. So although some people got excited, the latest baseball mega-blockbuster barely nudged my care meter.

How completely foolish of me.

Little did I realize that because of this trade I could once again be privy to greatness. Once again I had the opportunity to witness the awesome presence that is Thunder Matt Murton as his new team, the Oakland A's, visited beautiful Tropicana Field.

When I first saw his name in the lineup, I was pleasantly surprised. No longer denied by the oppressive Cubs organization, Thunder Matt not only started in left field for the A's, but he also batted clean-up, arguably the most important of all lineup positions.

And so it is with great honor that I may testify to my readers an eyewitness report of the July 22nd happenings of Thunder Matt Murton. Consider this, if you will, the hadith of the Redheaded Messiah.

1st AB: He struck out looking

2nd AB: He flew out to center

3rd AB: He grounded out to the catcher

4th AB: He popped a bunt to the catcher

5th AB: He reached on an error

To some, Thunder Matt may be a distant memory, but to me his legend lives on.

Yet, could there be another?
on July 22, 2008
Email ThisBlogThis!Share to TwitterShare to FacebookShare to Pinterest
Labels: TAMPA BAY RAYS, vs A's 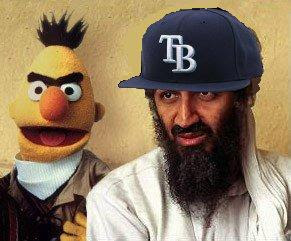 Call me what you will, but I just completed my tenth move this decade. Eight years, seven apartments, two friends’ spare bedrooms, and one summer sublease.

I’m the Mike Morgan of the rental community.

One of the best aspects of my new place is the location. I am now only 30 minutes from beautiful Tropicana Field, home of the greatest trash can racers ever home of the Tampa Bay Rays.

Which, in turn, leads me to my topic du jour: the impact of the Rays newfound success. Particularly the use of the term “bandwagon”.

According to a BaseballCrank.com article posted way back in 2001, there are two types of bandwagon fans,


One is the frontrunner – the fan who switches gleefully from team to team, always in search of associating himself with a winner. The other is the fan who just doesn’t pay as much attention when the team is losing.

Although I have not yet met any of the former (a.k.a. the "LeBron James" Rays fan), many baseball fans here in the Tampa area are being accused of being among the latter.

Even though you can’t spit without hitting someone in a Rays hat or a Rays shirt or any other type of Rays apparel, this should not be considered a bad thing. After nearly 10 years of mismanagement and front office ineptitude, the new Rays organization is finally starting to win. And of course the community has noticed. They would be foolish not to.

(Side note: when are the Rays going to make an American Express commercial like the one in Major League? How great would it be to see Joe Maddon say "We're contenders now," followed by Carl Crawford sliding across home plate with an American Express card? That would be priceless - oops, wrong credit card.)

Question: if you bought a CD by a local band to support them but found it was poorly done and sounded like someone farting on a snare drum, would you automatically buy their second release?

Now imagine after you bought the first release, the band released 10 horrible albums, each more inept than the previous. Any rational buyer would probably be hesitant to purchase album 11.

But what if album 11 had three top hits? What if it was on the top of the Billboard charts? What if nearly every song was on the radio and people couldn’t stop talking about it? What if the band had finally gotten their act together and found their sound? Could you blame people for giving them another shot?

Sure, some people will always spend their entertainment dollar on baseball. They are fans; that’s what they do. But the majority need to see a good product. People want something that will convince them their money is better spent at the ballpark than at the movies, or the beach, or the mall, or anywhere else. I have no hate for these people. I don’t blame them for finally showing up. Some day, when the Rays border on average again, the casual fans will leave. It happens. And I won't blame the fans then either.

However, that said, despite my defense of the Rays bandwagon, there is one type of Tampa-area fan that turns me into the bartender in Star Wars. One type of fan that makes me say, “We don’t serve your kind here. You’ll have to wait outside.”

Unless the Rays are playing the Yankees, absolutely positively no Red Sox fan should be allowed to root for the Rays. Even if they sacrifice life and limb.