Hurricane Harvey forces Astros to return to the dome life

According to the Tampa Bay Times, the Houston Astros will have their next three, if not six, home games moved to Tropicana Field due to the flooding and damage to the City of Houston caused by Hurricane Harvey.

According to Marc Topkin:


Tickets for the games — 7:10 tonight and Wednesday, 1:10 Thursday — will be $10 with general admission seating in the lower bowl (excluding premium areas), available via raysbaseball.com/tickets and the Gate 1 box office. Gates open one hour before first pitch, with parking $10 and limited concessions available. Fans will be encouraged to make donations to the hurricane relief via redcross.org, calling toll-free 1-800-435-7669 (HELP-NOW) or texting HARVEY to 90999 to make a $10 donation.


Playing in a dome is nothing new to the Astros. Besides playing the Rays three times a season at the Trop since moving to the American League in 2013, they played in the Houston Astrodome from 1965 to 1999. Ironically, the Astrodome was baseball's first domed stadium and Tropicana Field may be its last (non-retractable version).

Shifting games is also not unusual for the Astros. According to MLB.com, in 2008,


Hurricane Ike was bearing down on Houston, and the first two games of the Astros' weekend series against the Cubs were shifted to Miller Park in Milwaukee.


In regards to attendance, I will be counting the Astros attendance in the total Tampa Bay baseball attendance in 2017. My daily attendance reports will start with the Houston Astros, followed by local Minor League games.

Although tickets are only $10, I don't expect the weekday Astros versus Rangers games to sell very well. Attendees will probably either be hardcore baseball fans or people looking to attend to support relief efforts.If I had to guess, I would say each game of the Astros v Rangers might draw between 5,000-10,000. That is entirely a guess. They could sell-out in a wave of emotional support for the City of Houston. Which would be a very good thing.

I do expect the weekend attendance versus the New York Mets to be higher than the weekday games, if the Astros are still playing in the Trop this weekend. Many local Mets fans will head to Tropicana Field to see the Mets, who last played in Tropicana Field August 6-9, 2015.

Of course, Astros attendance at Tropicana Field will not count in Rays attendance, but it will be a separate category in tallying up total baseball attendance in Tampa Bay in 2017. I would guess there will be more local fans at the Astros games than at many spring training games, and I count those.

These games will most definitely help put total Tampa Bay baseball attendance over 2 million for the 12th year in a row.
on August 29, 2017
Email ThisBlogThis!Share to TwitterShare to FacebookShare to Pinterest
Labels: Houston Astros

This post is an update to other posts I've done exploring the Rays' lowest attended dates since 2007. This post will look at these dates and try to determine any patterns or trends.

The following chart depicts the 40 times the Rays announced less than 10,000 tickets sold since 2007. This list does not count the May 1st-3rd, 2015 relocated games between the Rays and Orioles. 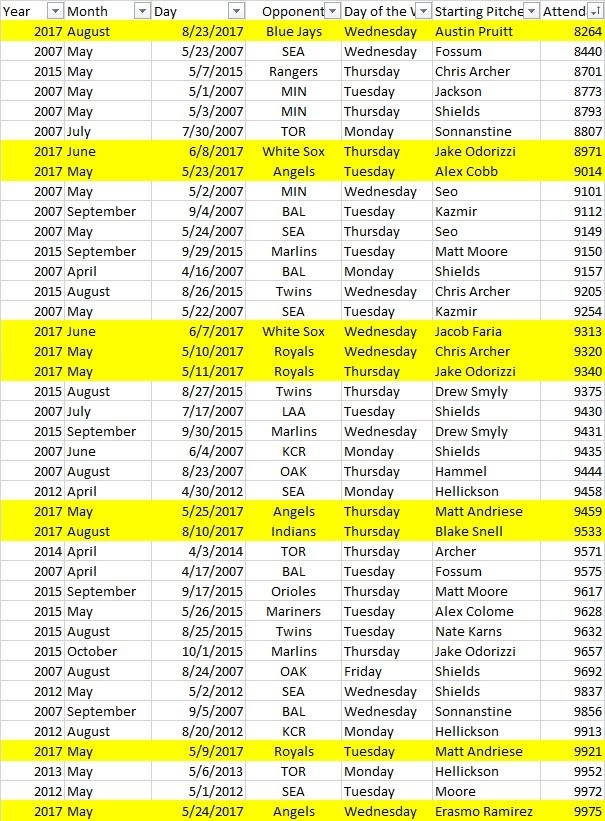 Rays attendance failed to reach 10,000 fans the following amount of times per year:

Rays attendance failed to reach 10,000 on the following days of the week:

Rays attendance failed to reach 10,000 during the following months:

Rays attendance failed to reach 10,000 for the following starting pitchers:

The Tampa Bay Lightning played on the following dates:

Rays attendance failed to reach 10,000 for the following opponent: 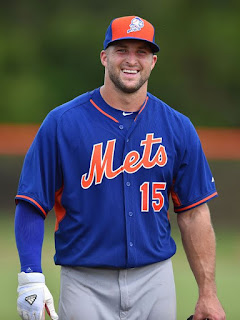 One of the biggest, if not THE BIGGEST, story in Minor League Baseball this season is the play of former NFL quarterback Tim Tebow. Years ago, I wrote for a Minor League Baseball site, and I guarantee I would have been all over this story in every location he played. But as this website is focused strictly on Tampa Bay area baseball, I am keeping my Tebow writing to only his appearances here.

Prior to his arrival in the Florida State League, Tebow boosted attendance throughout the South Atlantic League Columbia Fireflies, the Mets Low-A Minor League affiliate. Baseball America had a very good article stating Tebow was worth approximately 2,000 fans per game.

Although he has played for the St Lucie Mets since early July, Tebow visited Tampa Bay teams for the first time in early August, when the Mets played the Tampa Yankees and Clearwater Threshers. The Mets played their scheduled games against Dunedin and Bradenton prior to Tebow's arrival.

While it is easy to say "Tebow drew X fans", the true measure is looking how many he drew above the average per day. Weekends of course draw more than weekdays and heavily promoted days draw more than non-promoted days. The below chart shows the effect Tim Tebow had on attendance at Steinbrenner Field and Spectrum Field.

Additionally, for those curious, here is how the Tampa Bay Rays fared in ticket sales while Tebow played the Yankees across the bay.

Tim Tebow will continue to be a story as long as he continues to play Minor League Baseball. While he might play for the Mets as they visit Tampa Bay during Spring Training, his Minor League experiences against Tampa Bay area teams is likely over, as he will probably move up to the Mets AA Minor League affiliate next season.

But for one week during one season, Tim Tebow fans in Tampa Bay came out in droves* to see their favorite player.

(*droves = a completely arbitrary term of measurement not often used on this website)
on August 21, 2017
Email ThisBlogThis!Share to TwitterShare to FacebookShare to Pinterest
Labels: ATTENDANCE, CLEARWATER THRESHERS, Tampa Yankees

In 2010, ESPN published an article entitled "What's Lurking in Your Stadium Food?" which looked at food safety violations at sports stadiums across the United States. Out of 107 stadiums, Tropicana Field finished worst.


At Tropicana Field -- home of the Tampa Bay Rays -- every one of the stadium's 47 food and drink outlets inspected incurred a critical violation during inspections within the past year, according to Florida inspection reports. Violations include food residue in a cooler, toxic chemicals stored too close to food preparation areas, "slime" in the ice machines and thermometers not readily visible to measure the temperature of hot foods.


There are 47 eateries at the Trop in St. Petersburg and in 2012, two had perfect scores.  But over 46% had five or more critical violations.


Yesterday, Sports Illustrated released another list of food safety violations across Major League Baseball for the 2016 season. Again, Tropicana Field was last with the most violations.


With a staggering 105 critical violations in 2017, Tropicana Field brings up the rear in our rankings. Two food entities (the catering kitchen and the stand outside Section 303) tallied over 20 violations each. Violations ranged from the observed presence of live insects to black mold accumulating inside an ice bin. An employee was observed handling hot dogs and cash without washing hands in between. An ESPN report from seven years ago found that every inspected stand at Tropicana had at least one critical violation. That number has dropped from 100% to about 50%, but the Tampa Bay stadium still leads the way in eye-popping food safety numbers.


This is a pattern and a problem.

Yes, the Trop is over 30 years old. Yes, some of the pipes and other structural components are getting older. But there is no excuse why the Rays food service contractor is continuously ranked among the dirtiest in Major League Baseball.

Food is an essential part of the game watching experience. If the Rays food contractor can't get that right, they should be replaced. It might be too late to replace the food service vendor this season, but immediately after the season, every process should be re-evaluated and assessed.

Although the food service vendor and the Rays are different entities, the Rays need to get on top of this. They are the face of this issue. They need to issue a statement to fans and the public informing them what will be done. If they can issue statements on war statues across the bay, they can issue a statement telling people how food quality will improve in Tropicana Field.

As well, the major news outlets in Tampa Bay need to stay on this story. Don't accept slick Public Relations platitudes. Inform the public what is happening today to fix the problem and what is planned to happen in the future.

For seven years, food service has been a problem at Tropicana Field. As the Rays struggle with attendance, the experience should not be discouraging people from coming back. Bad food is a bad experience.
on August 09, 2017
Email ThisBlogThis!Share to TwitterShare to FacebookShare to Pinterest
Labels: MARKETING, TAMPA BAY RAYS

Welcome to our fourth monthly review of the Tampa Rays 2017 attendance. This post will look at attendance in games played from July 6, 2017 to July 26, 2017. 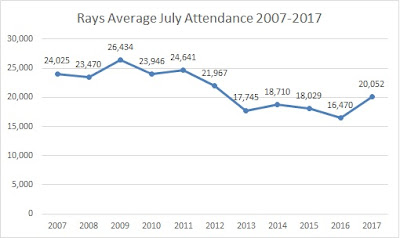 Let’s now look at the Rays June attendance on weekdays (Mon-Thurs) and weekends (Fri-Sun). As I have pointed out many times, the Rays usually have one of the biggest differences in Major League Baseball in regards to weekday versus weekend attendance.

This chart shows the Rays average weekday attendance in July since 2007. 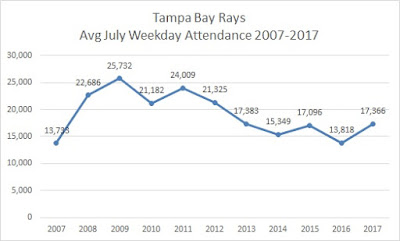 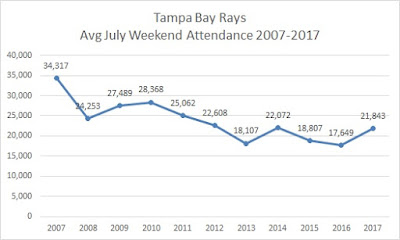 July 2017 was a good month for Rays attendance. While July typically does well because it is a summer month when kids are out of school and baseball season has rule of the sports world, this July was a result of a well-drawn series and improved play by the Rays.

August attendance is often a reflection of how the team is doing on the field. If the team is in contention, attendance tends to increase. However, if the team is not or falls out of the race, attendance will decline from July attendance and look more like April or May attendance.
on August 04, 2017
Email ThisBlogThis!Share to TwitterShare to FacebookShare to Pinterest
Labels: ATTENDANCE, TAMPA BAY RAYS