Book Review - Hall of Name: Baseball's Most Magnificent Monikers From The Only Nolan to Van Lingle Mungo and More 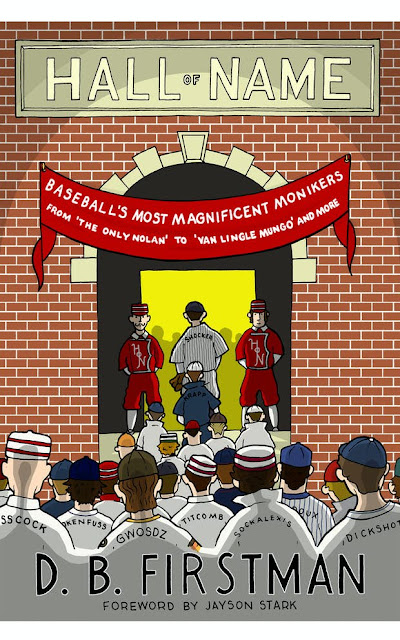 A few months ago, prominent baseball writer D.B. Firstman released their new book, "Hall of Name: Baseball's Most Magnificent Monikers From "The Only Nolan" To "Van Lingo Mungo" And More". As a baseball history fan, I was intrigued. As a Tampa Bay baseball blogger, I asked D.B. if the book had any relevance to Tampa Bay baseball.

Each of the 100 players profiled in the book has a short write-up. The write-up is divided into three parts. The intro contains the player's full name, pronunciation of difficult name (how do you pronounce Mmahat?), nickname, height/weight, born/died, position, years in the Majors, and fascinating name etymology/definitions. Following the intro is a brief biography of each player, which in some cases must have required a great amount of research. Closing each player's write-up are paragraphs on each player's best day in the bigs, "wonder of the name", "not to be confused with", fun anagrams, and "ephemera" - random notes about the player, from family tree to what they did after leaving the game.

While Quinton McCracken and Grant Balfour interested me from the onset, Hall of Name features 13 players affiliated with Tampa Bay, from those who originated in the area to those who played Major or Minor Baseball here to those who died here. As a matter of fact, the book's first three entries had significant Tampa Bay ties.


I was surprised so many of the players in the book had Tampa Bay ties, especially considering only two played for the region's Major League team. I was expecting them, and Milledge I knew was from the area. But the rest were a surprise, especially Lemongello's criminal escapade.

Overall, I recommend Hall of Name for anyone interested in baseball trivia and history. D.B. did an amazing amount of research, and it is a very fun read. As each profile is short, Hall of Name is the perfect book to read in short pieces, such as on a lunch break. Each profile is interesting and I think I learned more about the history of names from this book than I knew before. As I read, I couldn't help but admire D.B.'s ability to write seriously and (mostly) without judgement about these players' names. No name is disrespected, even if for Tony Suck "when it came to baseball, the name was totally apt".

Hopefully there will be sequel, one that perhaps dips into the Minor Leagues, Negro Leagues, or All-American Girls Professional Baseball League. I would love to read more about D.L. Rambo of the 1920 St. Petersburg Saints or Robert Orange of the 1969 Tampa Tarpons.

Click here to order Hall of Name: Baseball's Most Magnificent Monikers from 'The Only Nolan' to 'Van Lingle Mungo' and More from Amazon.

Or click here to buy Hall of Name: Baseball's Most Magnificent Monikers from 'The Only Nolan' to 'Van Lingle Mungo' and More from bookshop.org and raise money for local bookstores.

And I miraculously wrote this whole review without mentioning Rusty Kuntz.