No other local games played.
on September 30, 2017
Email ThisBlogThis!Share to TwitterShare to FacebookShare to Pinterest
Labels: Daily Attendance Report, Rays Daily, vs Orioles

In 2017, total attendance for Minor League Baseball in Tampa Bay was 412,212. In total, 260 Florida State League games were played between Bradenton, Clearwater, Dunedin, and Tampa. 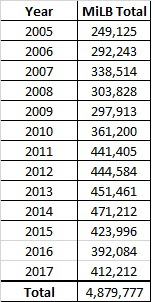 Since 2005, almost 5 million tickets have been sold for Minor League Baseball in Tampa Bay. 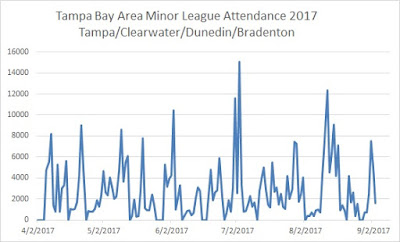 The large attendance spike in the middle is the July 3-5th weekend. Each local team had a fireworks display that was among their highest draws of the year. The attendance spike on the right in mid-August was when St Lucie Met Tim Tebow visited the Tampa Yankees and Clearwater Threshers. Each team saw an influx of fans hoping to see the ex-NFL quarterback in action.

I'll break down each team later on this week, but here is the overall trends for each of the four local Florida State League teams: 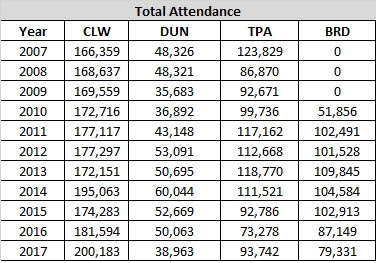 The following graph depicts the above chart: 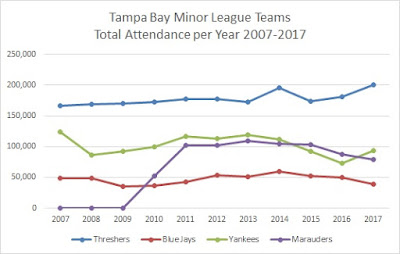 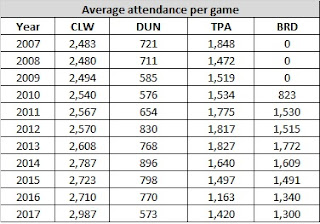 The following graph depicts the above chart. 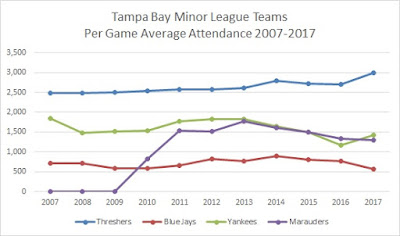 A few things we will discuss in a later post:

Welcome to our fifth monthly review of the Tampa Rays 2017 attendance. This post will look at attendance in games played from August 4, 2017 to August 24, 2017. 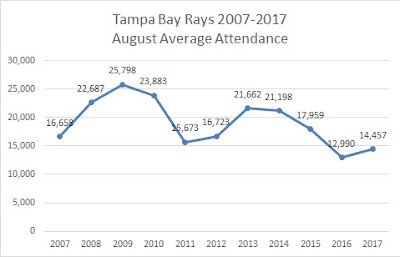 Let’s now look at the Rays June attendance on weekdays (Mon-Thurs) and weekends (Fri-Sun). As I have pointed out many times, the Rays usually have one of the biggest differences in Major League Baseball in regards to weekday versus weekend attendance.

This chart shows the Rays average weekday attendance in August since 2007. 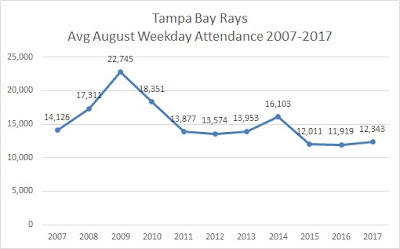 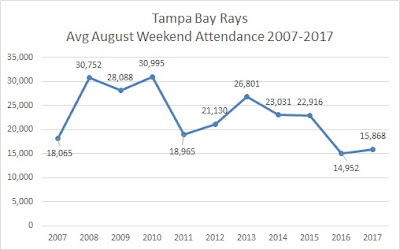 For the first time in 5 years, August average attendance increased. However, although attendance on the weekdays was better than it was in 2016, attendance on weekends was not - and a larger percentage of the total number of August games.

The Rays struggled in August and so did attendance.
on September 19, 2017
Email ThisBlogThis!Share to TwitterShare to FacebookShare to Pinterest
Labels: ATTENDANCE, TAMPA BAY RAYS

No other local games played.
on September 05, 2017
Email ThisBlogThis!Share to TwitterShare to FacebookShare to Pinterest
Labels: Daily Attendance Report, Rays Daily, vs Twins