This is the end.

For now, possibly. Or maybe for good. I haven’t decided. But this website won’t be as active as it was in the past. And I owe you an explanation why.
If you have read this far, thank you.

I started this website in January 2014. It began as a project while I was enrolled in the USF MBA program where I could showcase my analytical skills in business on a topic I was very familiar with – baseball in the Tampa Bay area. I had written about the Rays for several blogs as well as covered the Florida State League for MiLB.com and other sites.

I figured if I could add my growing business acumen to a discussion on baseball in Tampa Bay I could fill an unfulfilled niche. That is what business is all about, finding opportunities and making products to fill those opportunities. The goal was not to make money, but to prove I could write about business, do some solid analysis, and maybe convey my findings to a wider audience. If my findings made the desk of decision makers, even better.

As I continued, I found data that showed fan behavior and fan allegiances in Tampa Bay. Of course, it is now common knowledge that Tropicana Field is too far from the center of the region’s population, but I also published articles on rooting interest, discovering that only 50% of baseball fans in Tampa Bay are Rays fans. Another 20% are Yankees fans, roughly 6% are Red Sox fans, and the remaining 24% are fans of other teams.

While that was eye-opening, it wasn’t entirely a surprise. Florida metro areas are often landing places for people wanting to escape the cold of the north. These people bring their fandoms and they rarely ever change (despite all the fans and radio hosts who want them to). Local spring training also serves to reinforce out-of-town fandom by allowing those fans to spend money on their teams in March and April.

Other research showed that roughly 50% of Spring Training attendance in Tampa, and 25% of Spring attendance in Clearwater and Dunedin were locals. Local money was going into the coffers of teams that were not the local Major League team. Adding insult to injury, two of the local spring training teams are in the Rays division.

When I started this project, I looked at the leases for the local Spring Training teams. I thought perhaps there was a way for the Rays to gain more of a share of the local market if Tampa Bay spring training teams left when their leases expired. If I could enlighten people to the idea that Tampa Bay was overstretched and oversaturated, perhaps local politicians would see past their hyperlocal ideals and see the big sports picture.

Then Hillsborough County gave the Yankees 20 more years for no reason and Pinellas is ready to extend the Blue Jays – contrary to every economic study saying it is a bad idea.

So the landscape of the Tampa Bay baseball market isn’t changing, even if it is to the detriment of the Major League franchise.

That brings us to my efforts this season.

The highlight of my 2017 and the peak of this project was when I was featured as a Fangraphs Resident for the month of June. To be acknowledged within the baseball research community as a person in the know who could bring clarification to an ongoing problem was awesome.

Definitely the highlight of this website’s effort.

Unfortunately, while the baseball research community embraced me, local sports media rarely did. Only a small percentage talked to me about my findings and even fewer allowed me a bigger forum to discuss my ideas.

It would have been nice to get a little love from Tampa Bay Times beat writer Marc Topkin or be asked to appear on any of the many local sports radio shows. Their hosts knew who I was and in many cases followed me on social media.

Let me be clear for the media folks who ignored me or outright dismissed me: I do and have done analysis for over 20 years in various forms. I have provided insight to corporate executives and senior military leaders around the world. I take being ignored or dismissed as a professional slight. You and your audience are worse off and less educated because of your inaction. Congratulations.

Now that I have that off my chest, I do want to thank the many people who have read, commented constructively, or even just followed for the sake of learning something. You are all awesome and greatly appreciated.

There is a saying that writers should write for themselves and if anyone follows, then great. That is true to a point. I believe eventually the relationship between writer and audience becomes symbiotic, with both sides feeding from each other. The writer is given extra motivation from the community and the community enjoys more work from the writer.

That’s how I felt for most of this website’s existence. So thank you to all who read.

As I mentioned in the intro, I may post occasionally. I may still track attendance on my daily spreadsheets and may still post monthly trends. But I won’t be putting near as much energy into this site. I think four years is long enough.

Again, thank you to all who read and interacted. I greatly appreciate it. We had fun.
on February 14, 2018
Email ThisBlogThis!Share to TwitterShare to FacebookShare to Pinterest
Labels: Essays 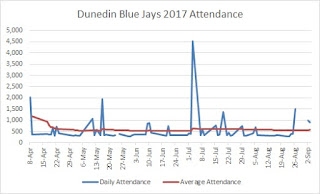 By Month:
The following graph depicts the average attendance by month. 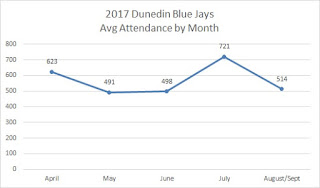 Blue Jays attendance increased 5% on the weekend compared to their average Monday through Thursday attendance.
The following graph depicts the average attendance by day. 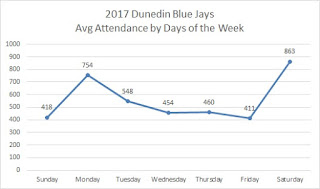 The following chart looks at how often daily attendance increases when compared to the day prior. 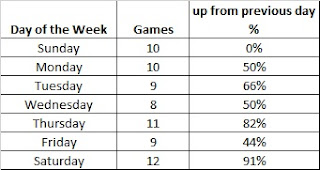 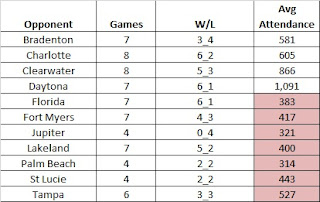 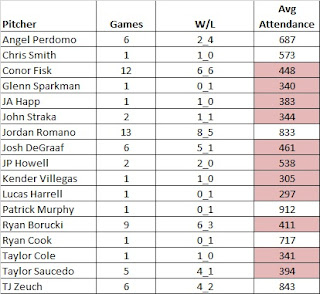 This chart depicts how attendance reacted from one starter to the next. If a pitcher is a great draw, the percentage between he and the prior starter should be higher. 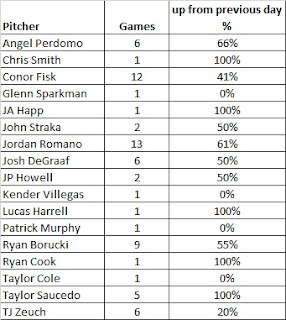 For other years, see:
on February 12, 2018
Email ThisBlogThis!Share to TwitterShare to FacebookShare to Pinterest
Labels: ATTENDANCE, DUNEDIN BLUE JAYS

Other notable appearances: None 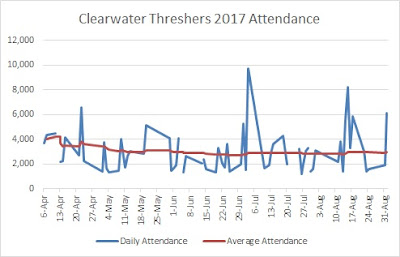 The following graph depicts the average attendance by month. 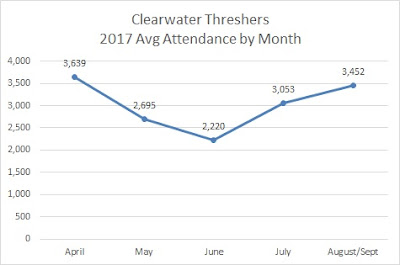 By Day of the Week:

Threshers attendance increased 11% on the weekends compared to their average Monday through Thursday attendance.


The following graph depicts the average attendance by day. 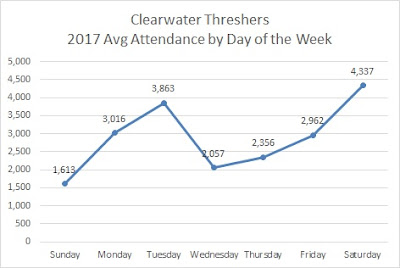 The following chart shows how often each day outdrew the game prior. 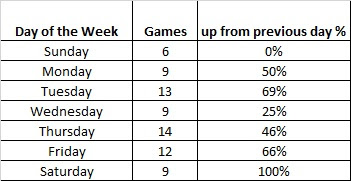 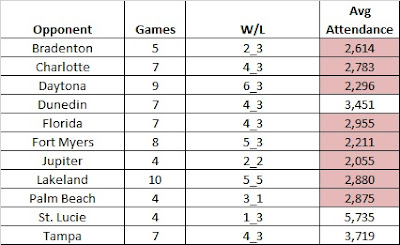 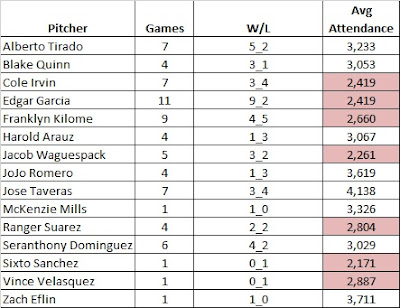 The following chart depicts how attendance reacted from one starter to the next. If a pitcher is a great draw, the percentage between he and the prior starter should be higher. 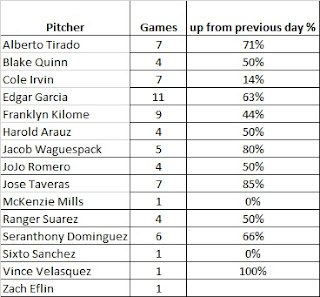