Time to Tank the Rays Tank 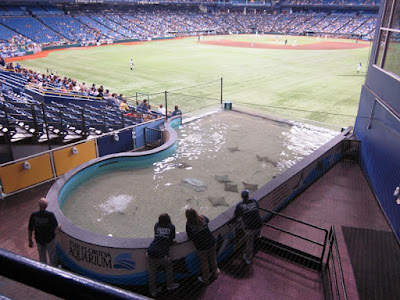 With the speed of any other uber-reactive organization out for attention, the People For The Ethical Treatment of Animals (PETA) has called for the Rays to remove the rays from their touch tank after a home run by Miguel Cabrera landed near the animals. According to their recent letter to the organization, PETA claims rays are “held captive at Tropicana Field...[and] are subject to harassment, loud crowds, and even baseballs capable of seriously injuring them

First, let me beat all the snarky commentors to the punch: there aren’t enough fans in the seats to be a “loud crowd”.

Second, that’s what rays get for killing Steve Irwin.

All jokes aside, I think the over-reactive PETA people have a point here. Yes, there have been only two baseballs hit into the tank in eight years. But it would only take one poorly placed home run to create a public relations disaster for the Rays. Small odds, sure, but totally avoidable nonetheless.

And if a home run did ever land into the tank with such force as to bruise or kill a ray the fallout would be horrible. The incident would make headlines on SportCenter, get analyzed on every channel from ESPN to Animal Planet, and make the Rays a national punchline for every late night talk show host and hack comic from Tampa Bay to Toksook Bay, Alaska.

On the back of the latest Rays ticket I bought, it states the following:


“The holder of this ticket voluntarily assumes all risk and dangers incidental to the game of Baseball, or other event for which this ticket is issued, whether occurring prior to, during, or subsequent to the actual playing of the game, including specifically (but not exclusively) the danger of being injured by thrown bats, fragments thereof, and thrown or batted balls or other objects, and the holder, by using this ticket, agrees that Major League Baseball (“MLB”), the American League, the National League, the Tampa Bay Rays (“Club”), other participating clubs, Tropicana Field, the City of St. Petersburg, Pinellas County, and Ticketmaster, including without limitation their respective players, other employees and agents and all other individuals and entities affiliated with such organizations, are not liable and are hereby held harmless by the holder for all injuries, expenses, claims and liabilities resulting from or related to any such cases.”

In other words, if you get hit with a home run and get hurt, it’s not the Rays, the players, or any one’s fault but yours. Sucks to be you. If you are in the outfield, double shame on you as you failed to hear or recognize that a five ounce orb is headed your way. Way to be heads up.

An animal swimming in a tank in right center field has no such recognition capability. It has no idea the ball is heading its way. No idea until it is too late. It might not happen today, tomorrow, this season, next season, or ever, but an injury is a possibility.

To make a comparison, despite no actual bombs ever going off in Tropicana Field, I have to empty my pockets and be inconvenienced with a magic metal wand every time I walk into the stadium because someone decided there is some slim chance I could be a terrorist. Meanwhile, there have been two animals killed by baseballs – both seagulls. The first happened in 1983 at the arm of then-Yankees outfield Dave Winfield and the other by a pitch by Randy Johnson of the Arizona Diamond Backs in 2001. Accidents happen.

Perhaps the Rays organization is ok with odds of a ray being hurt but not my claim that I am there to enjoy the game, not blow up the stadium.

Then again, this is the same organization – albeit different ownership – that acquired the infamous Jae Kuk Ryu, formerly of the 2007 and 2008 Devil Rays. In 2003, while a member of the Daytona Cubs, Ryu threw two baseballs at an osprey that lived in a perch high above Jackie Robinson Stadium. While the first throw missed, the second hit the bird. The bird died a week later.


So maybe it would be a good idea to move the rays from the touch tank and eliminate the chance of injury or public relations disaster. Or maybe make the rays somehow less vulnerable to incoming projectiles.

I am sure the Rays organization has reasons or maybe even calculations by their crack staff of sabermetric Keebler elves on the odds of an incident, but I would ask, “Is having the tank and the animals near the field of play worth the risk”?
on July 17, 2013
Email ThisBlogThis!Share to TwitterShare to FacebookShare to Pinterest
Labels: MARKETING, TAMPA BAY RAYS

New post on the Tampa Bay Rays on DRaysBay.com

I pitched an idea to the editors of DRaysBay.com, one of the biggest online websites covering the Rays. Although I have written for Rays Index.com, I like to stay in good terms with everyone and write a feature for other sites when possible. And the guys from DRaysBay have always been nice, and have provided me opportunities on other occasions, such as last year's piece: The Quest for 2 Million: 12 Ways to Market the Rays.

The year's article also explores the Rays from a business sense. Instead of proposals, however, I examine one of the Rays competitors in trying to attract fans: the five Florida State League minor league teams in the Tampa Bay area. This was a tough piece to write, not from the research part, but because I really do enjoy going to minor league baseball games and have written so much about the teams, the players, and the experiences. But I think the presence of those teams and the league is hindering the Rays ability to draw butts in the seats.

So check it out and if you like it, please let me know:

Does the Florida State League Hurt the Rays Attendance? - DRaysBay.com