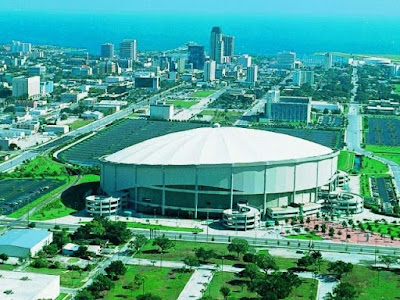 I am a huge baseball fan. You don't write millions of words on baseball over 14 years without being a huge fan. To paraphrase Dr Seuss, I will watch baseball in a plane, on a train, in a house, or with a mouse. So what I am about to write is painful, but sometimes the truth hurts.

Tropicana Field, home of the Tampa Bay Rays, should never have been built.

There, I said it.

There was a recent opinion piece in the Tampa Bay Times written by former city official Rick Mussett in which Mr. Mussett details the process behind selecting the current site for a Major League Baseball stadium. Mussett states that the Rays should not be blamed for the lack of development at the Gas Plant Area. That is correct. The blame should fall entirely on the City of St Petersburg administration and City Council.

The Gas Plant portion of the city plan had originally envisioned new industrial and multi-family residential development on the present-day Tropicana Field site, but in 1983 the city administration and the City Council modified that plan for a proposed new multi-purpose MLB stadium.

This was probably the worst decision in Tampa Bay planning in the last 40 years. Not only did it doom the area and not develop where re-development needed to happen, it was also a horrible, horrendous, terrible place for a baseball stadium, nowhere near the center of population for the region neither now nor then.

According to Waveney Ann Moore in the St Pete Catalyst,

Talk of redeveloping the community of small Black neighborhoods, spread across 66 acres in what was called the Gas Plant area, dates back to 1973. The City Council subsequently declared the area a place of “slum and blight” and promised residents better housing and light industry that would yield precious jobs.

That Mussett admitted the following is eye-opening and jaw-dropping.

After nine years of study, the City Council first approved a redevelopment plan that focused on new multi-family housing and light industry buildings that would have provided new homes and prospective new jobs.

More than a year later, the city and county changed plans, decided to build a major-league stadium “on spec,” as the developers would say.

Let this sink in: in 1983, city officials in St Petersburg thought the Tropicana Field site was a good site for a Major League Baseball stadium. Did anyone think this was bad idea?

Major League Baseball officials were probably laughing at the City of St Petersburg.

Unfortunately, if Rays leave the Tropicana Field site there is a chance, however small, they might leave the Tampa Bay area. If the City of St Petersburg had redeveloped the Gas Plant Area has they originally intended, the Tampa Bay area might not have professional baseball. However, they would probably be near the top of expansion areas.