Baseball is Back in Clearwater

Over the last month, while winter held the north in its cold embrace, buses full of baseball equipment migrated to Florida and Arizona. Then, following the buses, hundreds and pitchers and dozens of catchers made their pilgrimage to their respective spring homes. Finally, a few days later, the rest of the rosters traveled from around the world to fill their positions.

Before we kick off the spring contests in full bore this weekend, I had a chance to take a sneak peak at the old ballgame by attending the almost annual contest between the Florida State Seminoles and the Philadelphia Phillies. I say "almost annual" because in the five years I have lived in Tampa, I have seen three games, there was one rain-out, and another year it was not scheduled. But no matter how often they play, for Florida State fans and alumni, myself included, the game is still a treat.

(In case you are wondering why the Seminoles take on the Phillies, it is because the mayor of Clearwater, Frank V. Hibbard, is a Florida State alumnus. To me, the fact that he brings FSU down for a game as often as possible is reason enough to keep re-electing him.)

Even though the final score was 8-0 Phillies and the Seminole bats were completely overmatched, it was good to be at Brighthouse Field. Good to see the fans, the vendors, and of course the players. Good to see the Phillies play some of their regulars - Ryan Howard, Carlos Ruiz, and Shane Victorino all contributed to the Phillies offensive attack. Good to see some obscure names such as Delwyn Young, Josh Barfield, and Brian Schneider, all of whom I thought were out of baseball. Good to do the Seminole Chop with my FSU family. Good to lead a concession stand in "Take Me Out to the Ballgame".

And best of all, it's good to know baseball is back.

Bring on the rest of the spring.
on February 25, 2011
Email ThisBlogThis!Share to TwitterShare to FacebookShare to Pinterest
Labels: Bus Leagues Baseball, CLEARWATER THRESHERS, Spring Training

Keeping Faith in the Cowbell 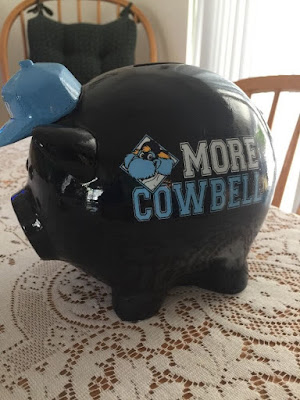 “Absolutely!! Have faith in us!! RT @GtotheLee: @DAVIDprice14 there goes Soriano & Balfour is there anybody left to field a team?”- David Price on Twitter, Jan 14th, 2011


We live in a very fickle society, and many things we hold dear one day we have no problem parting ways with the next. We swap our phones, move on to other jobs, flip our homes, and even trade in our cars often times without the slightest regret.

We call it “upgrading” and we are modern masters.

Sometimes, however, we don’t the ability to move up.  Sometimes life deals us a bad hand and we lose the very thing that comforted us the most.  Sometimes we have to pull out the duct tape, bubble gum, toothpicks, and screwdrivers and do our best MacGuyver impression. Sometimes, like David Price said, we gotta have faith.

That’s not to say the 2010 Rays were perfect. They had their faults. Scoring runs was a problem – calls to “Get The Man In” were often drowned out by loud collective groans whenever a Rays player struck out looking. They had an unsettled motley crew behind the plate – Shoppach couldn’t hit, Jaso couldn’t quite catch, and Navarro couldn’t keep his hands out of the donut box. And finally, at the end of the season, they faced the buzzsaw known as Cliff Lee two too many times.

But they did win 97 games and the American League East. And Cliff Lee is now in Philadelphia.

As pitchers and catchers start whipping around the cowhide (baseballs went from horsehide to cowhide in 1974, by the way) and the position players start arriving at Port Charlotte like secret agents in a Mission Impossible movie, Rays fans stand at the proverbial fork in the road. Will they root wholeheartedly for this assorted band of newcomers – some of whom they still don’t know by name? Or will they accept the uninformed generalization that marquee names, big contracts, and all-star jerseys win championships?

Those of little faith think the mountain is too high. They cower in the symbolization of Carl Crawford and Rafael Soriano signing with division rivals. They look at the no-name bullpen with derision. They miss the hustle, grit, and “most valuableness” of Jason Bartlett. They assume the signing of Johnny Damon and Manny Ramirez was strictly to sell jerseys, or better yet to invoke memories of the Hit Show. For them, competing for the division is only a pipe dream, and the youth of Baltimore and the shrewd dealings of Toronto mean the Rays will soon resume their familiar role as cellar-dwellers. These faithless masses may have been at Fan Fest, but they are waiting until June to visit regularly.

On the other side of the aisle are the hardcore Rays disciples. They believe every word of the Book of Friedman, recite the Psalms of Sternberg, and buy into the Bible of Silverman. They crucify non-believers and think any past success, no matter how obscure, indicates future superstardom when plugged into the Maddon Machine. They adhere to the philosophy that success and domination are guaranteed, no matter what moves peers or competitors make. Their cowbell is always perfectly tuned and they have their hat, jersey, and even their Rays socks picked out for Opening Day.

In the middle are the realists. They believe, but have their questions. They know David Price and Evan Longoria are still superstars, but they are not sure James Shields can stop giving up homeruns. They know Matt Joyce and Sean Rodriguez should get better with age, but they are not sure which Ben Zobrist is appearing this year. They are excited to watch Desmond Jennings, unsure about Dan Johnson, and have accepted the fact that BJ Upton is, well, BJ Upton. And even though they like Kyle Farnsworth, his attitude, and his mad fighting skills, they have no idea who or what a Joel Peralta is.

Realists will be at the Tropicana Field, economy permitting, but don’t be surprised if their visits are directly proportional to the Rays proximity to first place, or at least the wildcard. Come a disappointing August, they would rather watch the Rays from the comfort of their living rooms and send their love and admiration from a far.

No matter how much or how little faith Rays fans have, there is no doubt this season will be among the top five in Rays history – you still remember how bad they were, right? Barring an absolute cataclysmic catastrophe, there is no way the 2011 Rays will lose 100 games. They did not switch personnel with the Pittsburgh Pirates. As Rays fans, it is inherent that we come to terms with basic baseball economics more so than any other fanbase.  We have a stadium we don’t like, a team payroll smaller than the combined annual salary of one of our competitor’s infield, and a bullpen full of guys wearing “Hi, My Name Is” stickers.

Rooting for the Rays in 2011 may not be easy. It very well could be painful. On the other hand, it could be another magical summer. But these are the times that try the mettle of fandom, when the bandwagon is mostly empty. It is the time when every baseball fan gets goose bumps, whether they believe in process or predestiny, intelligence or intangibles, mathematical spreadsheets or managerial subconscious. It’s time for fans to walk with faith, knowing well that that very faith may have to carry them through the year.

But best of all, it’s time for baseball fans to ease away from the heat of the hot stove and bask in the warm sunshine of spring baseball.
on February 21, 2011
Email ThisBlogThis!Share to TwitterShare to FacebookShare to Pinterest
Labels: Essays, TAMPA BAY RAYS
Newer Posts Older Posts Home
Subscribe to: Posts (Atom)