On the field, there is no doubt the Rays have had an amazing season, winning 96 games and making the postseason for the first time in six years. Off the field, the season was less than spectacular, with the Montreal situation and the continued stadium saga looming over the franchise.

As the team enters the postseason, I have noticed a lack of marketing by the team throughout the region, especially when compared to the marketing of the Tampa Bay Lightning and Tampa Bay Bucs. My tweets on the issue caught the eye of Erik Waxler of ABC Action News. Waxler paid me a visit on Wednesday and asked me a few questions about the Rays and the attitude of Rays fans.

Always great to be able to talk to a bigger audience. Many thanks to Erik Waxler and ABC Action News.

It is designed to break your heart: Thoughts on the Rays two-city solution 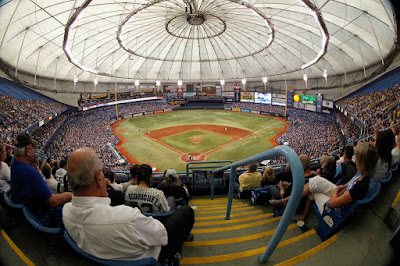 I have been writing about Tampa Bay baseball for over 10 years. For the first five years, I wrote about being a fan. I wrote about the World Series. I wrote about Game 162. I wrote about no-hitters, cowbells, and Rays-hawks. Then in 2014, I started this blog and dedicated myself to determining whether or not Tampa Bay was a Major League market.

As a Tampa resident, I came into the project with biases. I wanted to believe the market was not the problem.

For four years, I wrote every night. I tracked the attendance of the Rays, four Spring Training locations, and the four Minor League teams that call Tampa Bay home. I wrote about promotions. I wrote about bobbleheads. I wrote about traffic conditions and economic growth. I even wrote about hurricanes and Astros games. I was recognized for my research at Fangraphs as a resident writer in June 2017 and by mentions in articles in USA Today and several Tampa area publications.

After landing a consulting job overseas in 2018, I stopped writing regularly. On one hand, I knew writing about baseball from 5,000 miles away was going to be difficult, especially when I didn't know my work tempo. On the other hand, I decided I had written almost everything I could from open source data. From what I could acquire and what I analyzed, Tampa Bay could host a Major League team.

Admittedly, there are a lot of problems with the current layout of baseball in Tampa Bay:
The list goes on.

A lot of work needed to be done to make Major League Baseball successful in Tampa Bay. None of these issues were alleviated in 20 years.

On Tuesday, June 25th, the Montreal boogeyman finally appeared in the flesh. After years of avoiding the M-word, Stu Sternberg and the Rays front office announced a plan to split the Rays season between Tampa Bay and Canada. According to Sternberg, the Rays would play the first 40 home games or so of the season in Tampa Bay. Then they would fly to Montreal and play out the rest of the season.

(They also may or may not move their Spring Training back to St. Petersburg from Port Charlotte, Florida in order to give local fans more product. Here is where I say I wrote years ago that Port Charlotte was a mistake and the Rays should have looked to expand their market by spring training near Orlando. But I'm just a guy with a blog.)

The Rays will do this Tampa Bay-Montreal schedule every year. Forever.

While it is creative, this plan is befuddling at best, irrational at worst. It is like having a pitcher play every position and rotating them on the mound based on the weaknesses of each batter. Sure, it is legal, it may look great on paper, and may actually work, but it is not based in reality.

The Rays two-city solution requires two economies, two fanbases, two marketing staffs, two broadcast teams, and two stadiums (as if one was not difficult enough to fund, locate, and build). Sternberg envisions a "sister-city" relationship between Tampa Bay and Montreal marked by business investment and cooperation. He also envisions tourists travelling to and from each city bonded by fandom.

It is almost as if Sternberg wants St. Petersburg and Montreal to share the Rays as Tampa and New York share the Yankees. Per the latest data, approximately 12% of Tampa Bay roots for the Yankees and the Yankees presence is seen on billboards and marquees in Tampa throughout the spring. Instead of openly advocating for Major League Baseball to eradicate this conflict, and create a monopoly of baseball interest in the Tampa Bay region, Sternberg is using the Yankees-Tampa relationship as a model.

For Tampa Bay, Sternberg is advocating a smaller, more intimate, open-air stadium where the estimated one million Rays fans will buy one or two tickets per season over 40 games. What he fails to understand is that there will still be baseball in the area. After the Rays have their proposed "mid-season send off", local baseball fans can still spend their dollars and evenings watching Minor League Baseball at Spectrum Field in Clearwater, Steinbrenner Field in Tampa, LECOM Field in Bradenton, and a newly refurbished Auto Exchange Stadium in Dunedin. All of which are cheaper than Rays games and require much less emotional investment. Emotional investment that used to be spent on the Rays.


"It breaks your heart. It is designed to break your heart. The game begins in the spring, when everything else begins again, and it blossoms in the summer, filling the afternoons and evenings, and then as soon as the chill rains come, it stops and leaves you to face the fall alone. You count on it, rely on it to buffer the passage of time, to keep the memory of sunshine and high skies alive, and then just when the days are all twilight, when you need it most, it stops."

Stu Sternberg and the Tampa Bay Rays are planning to break the hearts of Tampa Bay when the summer is at it's peak. When the evening showers and humidity weigh down the soul of Florida. When our lethargic summer saunters are matched only by the leisurely pace of baseball. For over 20 years in Tampa Bay, fans waited patiently for their two weeks of Fall with a local beer and a Cuban, cheering on the local nine. Now the realities of politics and economics threaten to replace their summer respite with a vast emptiness. Their season will end early, and like Rogers Hornsby, they will stare out the window, remembering the distant echoes of the crack of the bat and listening for the faint advancement of professional football and hockey - franchises that call Tampa Bay home from start to finish.

The biggest shame of this whole debacle is that Stu Sternberg has roots in Brooklyn. He likes to remind listeners that he named his son after Sandy Koufax. But what would Brooklyn have said to Walter O'Malley if he told the Dodger faithful their beloved Bums would split time between Brooklyn and Los Angeles, that they would leave for the West Coast in the middle of every season? How would a Brooklyn business owner named Samuel Sternberg, a family man and soon-to-be father of Stu Sternberg, have reacted?

O'Malley probably would have been booed out of town. With this idea, Sternberg deserves the same.
on June 28, 2019
Email ThisBlogThis!Share to TwitterShare to FacebookShare to Pinterest
Labels: Beyond Tampa Bay, ECONOMICS, Essays, Front Office, Sister City Plan, TAMPA BAY RAYS

Been a while. Not sure if I will post as regularly or just on occasion. But there has been a lot of baseball news in Tampa Bay this offseason. Some of which has been covered very well. For now, when I see an angle that I don’t think is being covered, I’ll discuss it here.)

As most baseball fans in the Tampa Bay area are now aware, last week the Rays announced they are closing off seating in the 300 level, reducing the total capacity in Tropicana Field from 31,042 to somewhere between 25,000-26,000.

Of course, the jury is still out on what the Rays are doing to the space those seats used to occupy. As par for the course, the Rays front office used words like “intimate” and “better fan experience”. Deadspin’s Barry Petchesky rebuked those claims well in his article.

“Intimate,” that buzzword used by every team that moves to a smaller stadium, or renovates its existing one to have a smaller capacity—or just dreams of doing so. It’s about the “fan experience,” you see. Unless the fan experience you’re looking for is buying the cheapest ticket possible because sometimes it’s fun to go to a ballgame and sit in the nosebleeds and eat a dang hotdog.

For now, the Rays claim there will still be cheap ticket options at Tropicana Field. But the Rays still use dynamic pricing so fans only know how much a ticket will cost when tickets are set before the season. By driving up scarcity, and letting the dynamic pricing model take hold as the season progresses, the price of seats goes up according to demand, not by tier. As well, games against the Yankees and Red Sox will always be more expensive, despite attendance against each of those teams decreasing drastically since 2010. 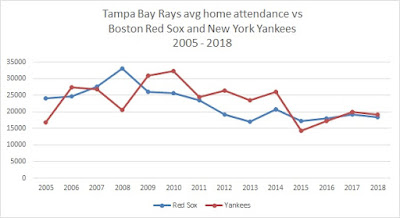 The bigger question remains: Does MLB in Tampa Bay and beyond need cheap ticket options? There are few inexpensive options for NHL, NBA, and NFL games, so why should there be in baseball? Are fans married to the Norman Rockwell myth of knothole gangs looking through wooden fences in the 1940s?

Are those myths as outdated as speedy lead-off men and starting pitchers?
There will always be inexpensive baseball options in America, and especially in the Tampa Bay area. Despite a 7% decrease from 2016*, Tampa Bay’s four Minor League teams – the Threshers, Marauders, Tarpons, and Blue Jays – combined drew over 350,000 fans for the 8th year in a row in 2018. 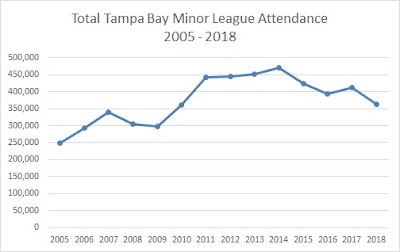 Local Minor League Baseball has always been in competition with the Rays, especially in the spring months of April and May. They market to casual baseball fans with cheaper ticket options, no dynamic pricing, and the same, if not better, “intimacy and fan experience”. There is a reason the Rays worst attended month (May) is typically the local Minor League teams’ best. Tampa Bay area Minor League teams are more conveniently located to most Tampa Bay baseball fans and the teams play outdoors, feature fireworks, and often have the same food and beer options as the Rays.

All for ticket and parking prices far cheaper than Tropicana Field – sometimes as low as $1.
Unlike nearly every other Major League team, the Rays never had a monopoly on low price point baseball in their region. Fans have always had cheaper and more convenient baseball options. And as long as there is Spring Training in Tampa Bay, there will be Florida State League baseball in Tampa Bay.

With their announcement last week, the Rays focused on their niche – dedicated fans who will travel to Tropicana Field to buy tickets to see Major League Baseball. That number will be between 1.1 million and 2.1 million in 2019. Even as the 100-loss Devil Rays, the Rays never drew less than 1 million, so don’t expect attendance to drop that low. And if the current maximum seating is 26,000 per game, the Rays can only max 2.1 million in 81 games.

It will be curious to see if Minor League Baseball in the Tampa Bay area will capitalize on the Rays decision and increase their marketing to casual fans looking for lower price point baseball options.