A few links of note from the Tampa Bay Business Journal:

According to a syndicated article in the Tampa Bay Business Journal, Tampa Bay is scheduled to break the 3 million mark in total population at some point in 2017. The Tampa-St Pete- Clearwater area is expected to grow 1.2% and near 3.07 million by year's end.

According to Wikipedia, Tampa-St Pete-Clearwater is the 18th largest metro area in the US. Even with the gain beyond the 3 million mark, the area will still trail San Diego's 3.3 million residents.

Tampa Bay is definitely a growing region. One with enough people and enough income to support Major League Baseball.
on January 26, 2017
Email ThisBlogThis!Share to TwitterShare to FacebookShare to Pinterest
Labels: Demographics

Rays and Yankees fans in Tampa Bay and distance to stadiums

During the last few weeks, I have analyzed Tampa Bay zip codes containing the most amounts of Rays and Yankees fans. I also looked at how far these zip codes are to Tropicana Field and Steinbrenner Field.

What I did not look at was the percentage of each teams' fans among baseball fans in respect to the distance from each stadium. Since not all zip codes have the same population, it is erroneous to use the total amount of fans to judge the impact of the team's location on the fanbase.

A better measure is the percentage of population claiming to be fans of the respective team in that zip code.

Let's look first at the percentage of Yankees fans among baseball fans per zip code compared to proximity to Steinbrenner Field. 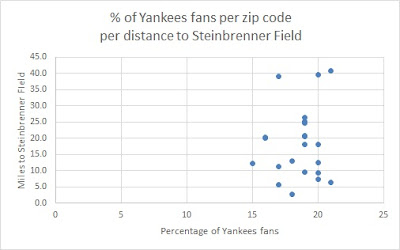 Now let's look at the percentage of Rays fans by zip code. 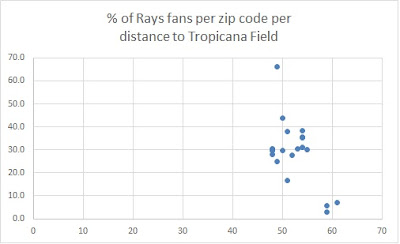 I wonder if most of Pinellas is near 60% and most of Hillsborough County is closer to 50% Rays fans among baseball fans.

There is still a lot of work to be done in regards to zip code analysis. Initial analysis however proves a link between closeness to the Rays stadium and a higher percentage of Rays fans and a lower percentage of Yankees fans.

Initial analysis also shows that proximity to Steinbrenner Field is not a strong factor in Yankee fandom in Tampa Bay. As I have mentioned before, the Yankees are a global brand and are popular everywhere.
on January 24, 2017
Email ThisBlogThis!Share to TwitterShare to FacebookShare to Pinterest
Labels: Demographics, TAMPA BAY RAYS, Tampa Yankees

Over the past year, I have explored many Tampa Bay area zip codes. I have looked at these regions by population, determining how many baseball fans live in each and how many of these fans are teams of what team. Then I determined how far each of these fans are to each of Tampa Bay's baseball stadiums.

This post is the second of several to combine zip code demographics and look for patterns and trends.

Again we will start with a list of the top 25 most populated zip codes in Tampa Bay per the 2010 census database on census.gov. 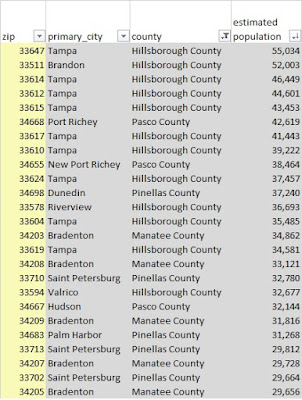 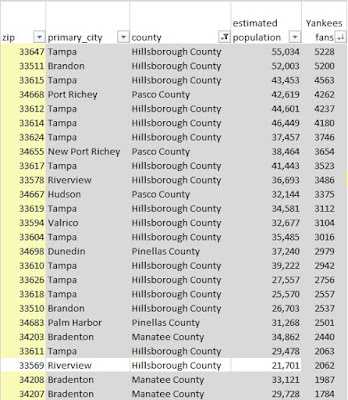 The biggest difference is that the three St Petersburg zip codes in the first chart (33710, 33713, 33702) are not in the second chart. However, 5 more Hillsborough County zip codes are among the most populated with Yankees fans.

These 25 zip codes have a population of 909,553. The total amount of Yankees fans in these zip codes is 81,295, or 9% of the population. Now let's look at how far each of these Yankees fan-heavy zip codes are from Steinbrenner Field. 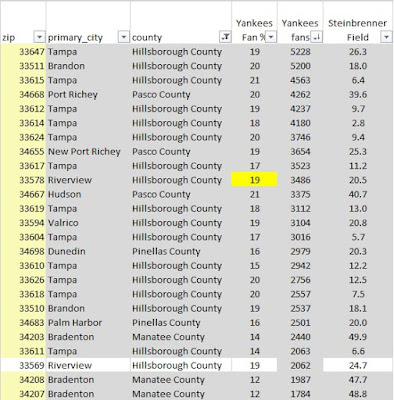 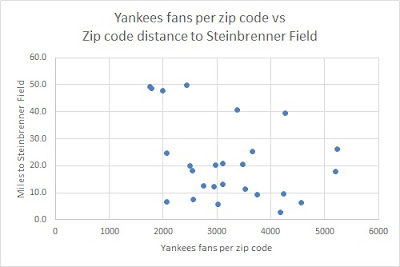 There are many Yankees fans in Tampa Bay. Many have moved into the area from New York. Others are children of Yankees fans. Yet others root for the Yankees as they have been spring training in Tampa since 1994. The Yankees presence in the area is undeniable.

That 9% of the population of Tampa Bay roots for the Yankees poses a problem for the Rays. It also poses a dilemma for Tampa politicians. These are the fans attending Yankees Spring Training, Tampa Yankees games, and supplementing Rays attendance in games versus the Yankees. Based on recent attendance trends, we can guess local Yankees fans are no longer making the drive to Tropicana Field as Yankees vs Rays attendance has dropped severely in recent years.

But that these fans buy Spring Training tickets hurts the assumption that Spring Training is only for tourists. These fans are spending their local dollars on the Yankees product. To believe that they are not is dishonest.

Even if the Yankees moved their Spring Training from Tampa (where they are contracted until 2046), there would still be Yankees fans in Tampa. There are Yankees fans everywhere. The Yankees are a global brand.

That the Rays have to compete in their own market against a global brand is a problem Major League Baseball has created and shows no intention of solving.
on January 22, 2017
Email ThisBlogThis!Share to TwitterShare to FacebookShare to Pinterest
Labels: Demographics, Tampa Yankees, Yankees

Over the past year, I have explored many Tampa Bay area zip codes. I have looked at these regions by population, determining how many baseball fans live in each and how many of these fans are teams of what team. Then I determined how far each of these fans are to each of Tampa Bay's baseball stadiums.

This post will be the first of several to combine zip code demographics and look for patterns and trends.

First, a list of the top 25 most populated zip codes in Tampa Bay per the 2010 census database on census.gov. 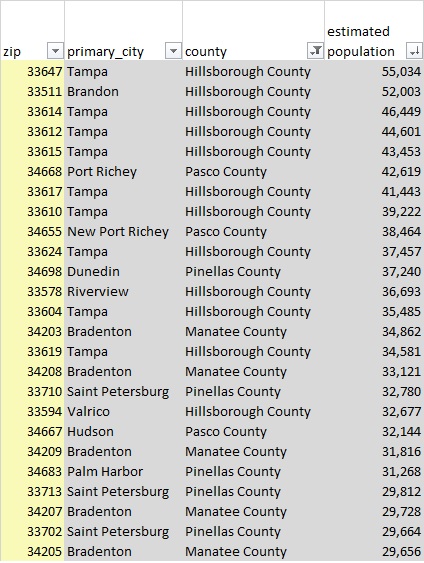 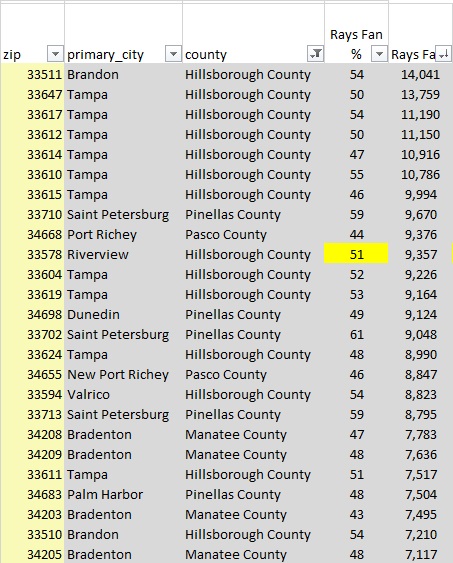 These 25 zip codes have a population of 926,581. The total amount of Rays fans in these zip codes is 234,516, or exactly 25% of the population. Now let's look at how far each of these Rays fan-heavy zip codes are from Tropicana Field. 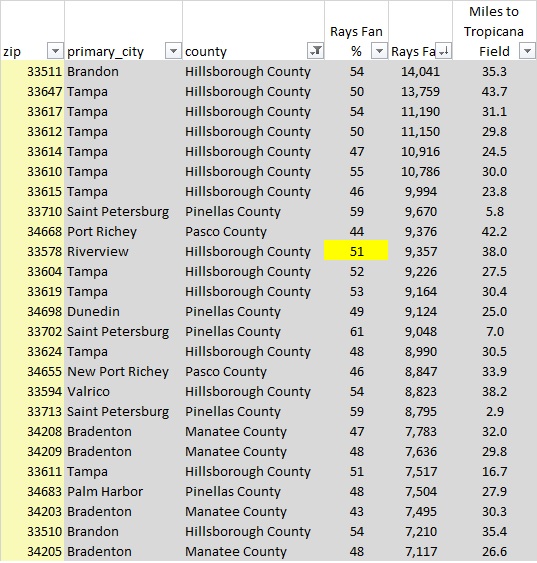 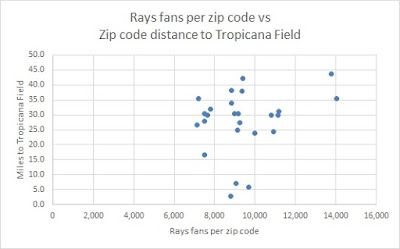 This chart depicts the Rays's struggle. They don't have enough fans and those they have live too far away. This isn't old news. But it is good to put numbers to the situation.

This data would be interesting to compare to season ticket holders per zip code and credit card purchases per zip code. But that data is of course proprietary.
on January 03, 2017
Email ThisBlogThis!Share to TwitterShare to FacebookShare to Pinterest
Labels: Demographics, TAMPA BAY RAYS 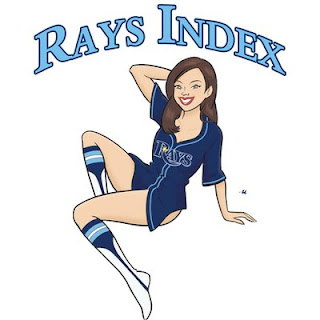 A few days ago, Cork Gaines of Rays Index wrote what could be considered a farewell post. Entitled "It’s not you, it’s me … and the Rays and the Oregon Ducks and the New World Order of sports media", Cork discusses why his website was sparsely written on in 2016.

For years, Cork was a one-man show. He was the biggest one-man blog in the Rays media. Whereas DRaysBay had several top writers, Cork put out daily posts and regular analysis posts that spoke from a fan's voice. He incorporated stats when needed, but it was not a stat-heavy site. He was a regular guy writing about his favorite team in the voice he wanted to hear.

In 2010, I emailed Cork and asked if I could contribute. Cork approved, and a few days later, my first post on Rays Index, "The Devil in BJ Upton" was published. I wrote for Cork occasionally for five years. My last post on Rays Index appeared in October 2015. While Cork covered the day-to-day happenings, my posts always looked at the big picture from a fan's point of view. I didn't look at business and marketing and write from the brain as I do here, I wrote from the heart.

While I consider every post I ever write my pride and joy, I am particularly proud of two posts I wrote for Rays Index:

The Fox Sports Girls post attacked Fox Sports for what I thought was a horrible marketing approach to women. The open letter to the Rays owner was the first of many times I have been critical of Mr. Sternberg.

Other posts on Rays Index were precursors to what I am doing here:

(The last post was written after I started this blog.)

Cork gave me a chance to find my voice. For that, I am thankful.

Now that I have gone solo and started my own site, I've learned how tough it is to build an audience, especially on a niche subject such as the business of baseball in Tampa Bay. Although I know business-minded folks, local media, elected officials, and academics have read this site, it hasn't caught the wave of popular discourse needed to make it my sole interest.

Attracting attention and readers is something Cork discussed in his farewell post.


I could still try to bring that last 10% to you guys, but the return (for you and me) on time investment is just no longer the same.


This is understandable. I don't have a wife and kids yet, so I have time to put into this site. I have also been blessed with good jobs, some of which I have gotten because of the analysis skills put to use here.

Cork also mentions the need to be on social media. That's huge. People don't visit blogs regularly as they used to. RSS readers aren't used as often as they were years ago. They access their social media feeds, talk and chat, and maybe open links from there.

As a niche site, I do have a small advantage. If people Google "Rays attendance", they will usually find my site near the top of the Google search results. This site is usually second to ESPN in the results. That's a good thing and a major driver for web traffic here.

While I can't comment on the animosity between Cork and other writers (I wrote for every site I could for a reason), I would like to comment on his relationship with the Rays.


I totally understand. Rooting for the Rays is tough now. While I am positive Major League Baseball can succeed in Tampa Bay (like NFL and NHL), there is a chance that team may not be the Rays. Maybe there will be a new stadium, attendance will spike for a few years, but the team won't improve and attendance will decline in a shiny new stadium.

Maybe this is why Tampa Bay politicians and local regions don't mind putting their dollars into Spring Training stadiums.

If politicians, regional sports commissions, and even one of the top Rays bloggers are hedging their passions, why should anyone care?

Blogs come and go. I've written on many defunct blogs. But what scares me most about Cork Gaines reducing his coverage is that the Rays are losing the battle for passion of the Florida sports fan.
on January 01, 2017
Email ThisBlogThis!Share to TwitterShare to FacebookShare to Pinterest
Labels: Media
Newer Posts Older Posts Home
Subscribe to: Posts (Atom)