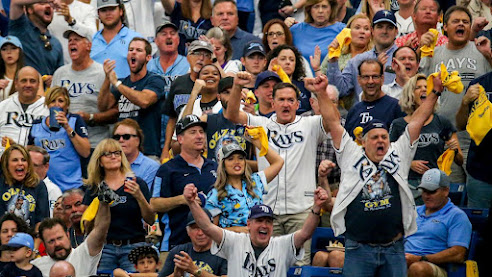 (This was submitted to the Tampa Bay Times Editorial page on July 7th, 2021. After 3 weeks of no response, I decided to publish it here. I don't have 1% of the Times reach. I do like to think I have an informed opinion on these matters. After all, I have been writing about the Rays and baseball in Tampa Bay for over 10 years. But for whatever reason, the Tampa Bay Times didn't feel the need to print this.)
Over the last two years, all Tampa Bay sports has done is win. No matter the sport, we’ve made championships, won trophies, and been the talk of the sports world. And our fans have enjoyed every minute of it. Most of them.
While Lightning fans get boat parades and Bucs fans get the glory of the greatest of all time, Rays fans are living with the idea that they won’t have a team to see in the summer and fall of 2027. Or maybe sooner if Rays owner Stu Sternberg gets his way.
And while outgoing St Petersburg Mayor Rick Kriseman pushes back on the Rays and calls their plan a non-starter, several St Pete mayoral candidates as well as Tampa Mayor Jane Castor support this plan. Who do you think the Rays will want to negotiate with?
The Rays need a new stadium. That is unequivocally true. The where and how to pay for it has been debated for over 10 years and it is wearing down the fanbase. It is hard for more than diehards to care when the finger pointing and relocation rumors take more headlines than the team’s success.
The Rays’ Sister City plan of “sharing” a team with Montreal makes no sense for the people of Tampa Bay. It is disrespectful to our fanbase and will lead to the team eventually moving to Montreal for good when Stu Sternberg sells the team. Despite front office claims they want the Rays here for generations, there is no doubt selling the team is Sternberg’s final goal. He wants to maximize his profits first. Two new stadiums in two markets would do that. And when he does sell, what is preventing the new owner from completing the move, leaving Tampa Bay with a useless stadium, too small for a new full-time team and too big for another Minor League team?
“Never trade with the Rays” is an axiom well known in baseball. They have one of the smartest front offices ever. With over 10 years to prepare and a staff working night and day on metrics, our politicians have no chance negotiating a winning deal for taxpayers unless they play hardball. The current proposal of 40 games of Rays baseball, Spring Training, and a new home of the Rowdies if Tampa Bay builds a new stadium is like trading an all-star pitcher for two benchwarmers and a punter. Local baseball fans know the late season pennant race is the best part of the season, Spring Training is for tourists, and Rowdies soccer, while fun, isn’t baseball.
Not only will this deal turn off what remains of the Rays fanbase – why support a team that moves midseason? – it will also foster unhealthy debate as to which city supports the team more. Not to mention moments in which the fanbase shows appreciation to players such as jersey retiring ceremonies, statues, or other banners. Will they be held in both locations? Or just the most deserving location?
Prior to the Stanley Cup Championship, Tampa Mayor Jane Castor said she would discuss sharing a baseball team with the Mayor of Montreal, but she wouldn’t discuss sharing the Stanley Cup. If this was a joke, it wasn’t funny. Tampa Bay area baseball fans were disrespected and blasted the mayor on social media. Unfortunately, Jane Castor has yet to apologize. She has no reason to, even if the Rays leave town, she can still wear a Yankees hat.
We hope our politicians don’t bend to the whimsical desires of billionaire sports owners. We should not “share” a baseball team. What the Rays need is a centralized stadium and a monopoly of baseball interest in Tampa Bay, even if that means getting rid of regional Spring Training. The Rays are right, no other Major League market has the difficulties of Tampa Bay. But disrespecting the fans is not a step in the right direction.
on July 27, 2021
Email ThisBlogThis!Share to TwitterShare to FacebookShare to Pinterest
Labels: Essays, Front Office, Sister City Plan, TAMPA BAY RAYS
Newer Post Older Post Home