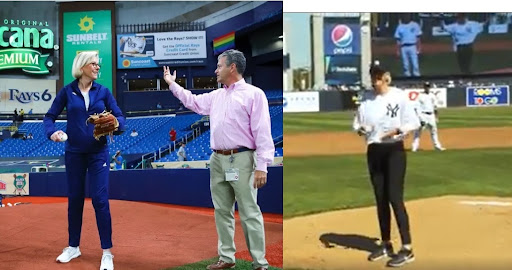 Ever since the Tampa Bay Rays have announced their idea to split the baseball season with Montreal, few Tampa politicians have come out and opposed the plan, despite St Petersburg politicians calling out the Rays and opposing their plan.

As I have mentioned before, the Rays have three audiences they are appealing to. They are, in order:

1B) Local businesses - important to buy ads, corporate season tickets, and other cooperation

3) Fans - irrelevant to funding. Important only for one revenue stream and visuals.

The Rays plan currently is a stadium in Tampa, more specifically in Ybor City. There are several plots in Ybor in which a stadium can be built - many of which are in tax-break funded redevelopment zones. These zones are in the Rays advantage, as they will have to pay less for the stadium.

(Although they are trying to pay nothing as it is, but if they have to pay, they want to be in an area that will give them a tax-break for "redevelopment". How a sports stadium is the best use of land ear-marked for redevelopment is beyond me but that's not the political perspective I want to address today.)

So why are Tampa politicians, led by Mayor Jane Castor, so supportive of the Rays Sister City plan?

Because Jane Castor and other local politicians don't care how many games the Rays play in Tampa as long as Tampa is in the name and the cost is acceptable.

Economists like to say that local sporting events are not economic engines and are predominantly only a reshuffling of local money. For example, if they are was no sports in a city, people would go to the movies, go to dinner, go bowling, go to the beach, etc. They would still spend, but on other leisure activities. Local sports doesn't rely on tourists for existence and local economies don't rely on sports for existence.

Tampa politicians aren't supporting the Sister City plan for economic reasons. They are supporting it for marketing reasons.

"Champa Bay" is very catchy. Being a "City of Champions" is a great pitch to tourists, businesses, and people looking to move. Everyone wants to be near a winner and sports is a great community unifier. I guarantee people of differing political, religious, and other demographic persuasions attended the championship river parades of the Lightning and Buccaneers.

As long as the name "Tampa" is on a team, Tampa can reap the benefits of a team's success. The bubbles of COVID-19 seasons proved this. The Lightning didn't play a single home playoff game in the COVID-19 2020, yet politicians were quick to claim them. The team still "belonged" to Tampa, despite playing thousands of miles away.

If a Rays team splitting time with Montreal won the World Series, they would still contribute to Champa Bay. They can play 40 games or 4. It doesn't matter to politicians. They are rarely seen at games anyway for more than political appearances.

I have outlined the benefit, now let's look at the cost.

The Rays don't want to pay for a stadium. They have balked whenever asked about cost. They claim "they don't want to start in the red" in a new home. They want to increase their revenue while paying the same cost for a building that they pay now. From their business perspective, that makes sense.

So the Rays devised a plan that will only cost two cities $300-500 million each to reap the benefits of claiming a winning team in their regional marketing material. Tampa politicians may balk at a billion dollar cost, but half of that might be acceptable if Visit Tampa Bay and other local tourist groups can mention the team in their pitches to people looking to visit and businesses looking for new home.

The alternative is Rays move and Tampa has only the Lightning, Buccaneers, and Rowdies to claim as part of Champa Bay. Which is not a bad situation to be in, but in the mind of a politicians, the more winners they can rub elbows with, the better. Even if the voters have to pay the cost.

Of course, if the Rays move and the Yankees get back on track, the Tampa mayor can claim the Yankees.

(Spring Training has always been insurance from a political marketing perspective. If the Rays perform poorly, Tampa, Clearwater, Dunedin, and Bradenton can claim to be the Spring Home of the Yankees, Phillies, Blue Jays, and Pirates, respectively. If the Rays do well, those cities and towns tie their wagon to the regional team.)