People love fireworks. There is no doubt about that. Fireworks are one of, if not the most popular promotion in baseball. Especially when they happen in on or near Independence Day. Few things are more American than beer, hot dogs, baseball, and fireworks.

I've written a bit about fireworks filling seats with fannies. Last night, the fiery phenomenon struck again as the Clearwater Threshers set a new single-game attendance record with 9,966 fans in attendance. Fans were "Standing Room Only" at Bright House Field as attendance was at 117% of capacity.


The Threshers commented on their new record:


Celebrating their 30th season as a Phillies Minor League Team in Clearwater, it was only appropriate that the new record attendance happen this season. "Clearwater and its surrounding community have really embraced the team since moving into Bright House Field in 2004. Each year we have seen record growth in attendance and it really is a credit to our great staff and wonderful fans," said Threshers General Manager John Timberlake.

Since 2007, the top 6 of the Threshers top 10 single-game attendance numbers occurred on July 3rd. 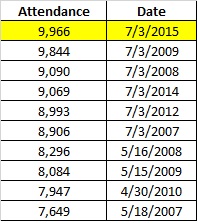