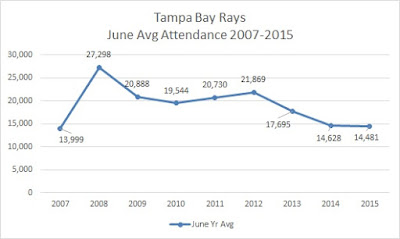 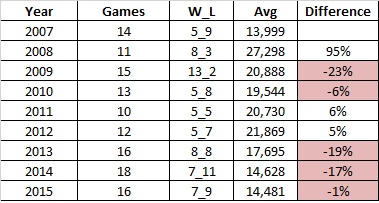 Let's now look at the Rays June attendance on weekdays (Mon-Thurs) and weekends (Fri-Sun). As I have pointed out before, the Rays usually have one of the biggest differences in Major League Baseball in regards to weekday versus weekend attendance.

This graph shows the Rays average weekday attendance in June since 2007. 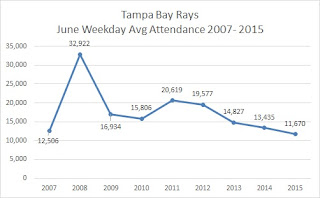 The first thing we see in this chart is 2008. It sticks out like a sore thumb. But if we look at the chart above, we see the Rays only played 4 weekday games at home in 2008. These games included three highly attended interleague games against the Cubs and one interdivision game against the Red Sox.

Despite the decrease, the Rays actually saw an increase in average weekday attendance since May 2015. 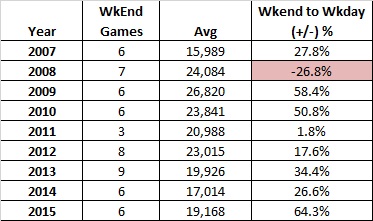 The following graph depicts the chart: 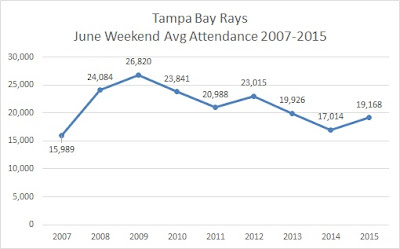 Finally, some good news. The Rays average June weekend attendance increased over 2,000 fans per game from 2014 to 2015. If we look at the weekend schedule, we can perhaps get an idea why. In 2014, the Rays played three games each versus Seattle and Houston on June weekends. In 2015, their opponents were the White Sox and Red Sox. While the average attendance of the White Sox series was nearly equal to the Mariners series, attendance for the series against the Red Sox was far better than attendance for the 2014 series against the Astros.

However, while attendance did increase on the weekends from 2014 to 2015, the Rays did have their biggest difference in weekend to weekday average June attendance since before 2007. A well-attended Red Sox series on the weekend surely helped, but since 2012, the Red Sox have not been the draw they once were.

Another factor worth watching will be how the Rays marketing and sales changes following the resignation of long-time Vice President and Chief Sales Officer Mark Fernandez. Will there be any changes to processes and procedures with Fernandez's departure?

The Rays still do have VP Marketing and Entertainment Darcy Raymond, VP Sales and Service Brian Richeson, and VP of Strategy and Development Bill Walsh. All of these VPs have been with the team since at least 2007.
on July 06, 2015
Email ThisBlogThis!Share to TwitterShare to FacebookShare to Pinterest
Labels: ATTENDANCE, TAMPA BAY RAYS
Newer Post Older Post Home