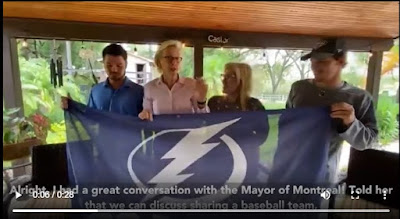 Hockey is a big deal in Tampa Bay. The Lightning are quite possibly the second most popular team in Tampa Bay behind the Bucs. And during the NHL playoffs, and especially the Stanley Cup Finals, no other sport in Tampa Bay matters. It is deservedly the Bolts time in the spotlight.

This Stanley Cup quest unfortunately comes with the baggage of pitting Tampa Bay versus Montreal, the city Rays owner Stu Sternberg has courted and threatened to move the Rays to. The jokes and jabs on twitter from Montreal fans and ignorant media have been annoying, albeit tolerable. The Rays ownership put us in this mess, so we have to live with it for as long as Sternberg continues with his shenanigans.

However, we should not have elected officials in the Tampa Bay area jesting, joking, or joshing about losing our baseball team. And that is exactly what Tampa Mayor Jane Castor did in a tweet video before Game 2 of the Stanley Cup Finals.

"Alright, I had a great conversation with the Mayor of Montreal. Told her we could discuss sharing a baseball team, but we are not sharing the Stanley Cup! Go Bolts!"

Why would Mayor Castor even joke about this? Apparently she has no finger on the pulse of baseball fans in Tampa Bay. While she has thrown out the first pitch at Rays games, she has also thrown out the first pitch at Yankees spring training games. So baseball loyalty doesn't matter to her. Having a team in Tampa, whether it be the Rays, the Yankees, or both, is transactional to her. There is no emotional attachment to any of them. As long as she gets fans' votes.

The problem with Jane Castor undermining Mayor Kriseman in St Pete and throwing Tampa area Rays fans under the bus is that she has has nothing to lose by supporting the Sister City plan. If she gains 40 games and the Rays in Tampa, she wins. If the Rays stay in St Pete, she has no gain and no loss. If the Rays go to Montreal, she still has the Yankees.

Fortunately, Mayor Castor's tweet was not well received by Rays fans on twitter. As of 1am, July 1st, there was not one positive comment associated with her tweet and over 40 tweets from Tampa Bay sports fans objecting to it. Although twitter is far from public opinion, when the ratio is that bad, it is clear Mayor Castor struck a nerve.