Selling Curveball at the Crossroads at Fergs Sports Bar 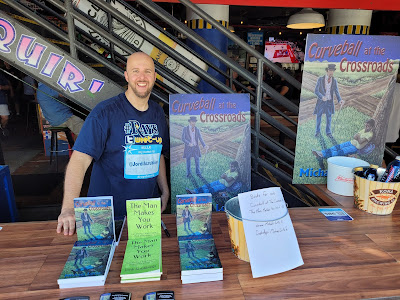 Last Saturday, 7/31/2021, I had the opportunity to set up shop and sell some books outside Ferg's Sports Bar in St. Petersburg, FL. I have set up there before, but have never had the success I had last Saturday.

I walked away with over $150 and sold over 10 books. I sold 6 copies of Curveball at the Crossroads and 7 copies of my previous joke book, The Man Makes You Work, written under the alias Jordi Scrubbings (Long story. See my creative blog The Serious Tip for an explanation.)

Saturday was a long day. I started by chatting on the radio with my friend Mike Rickard on the St Pete Sports Connection. I followed former Major League pitcher Anthony Telford on air, which was really cool. Mike and I talked baseball current events and of course Curveball at the Crossroads.

After I get off the air with Mike, I went to visit my friend Nick Major in his inpatient care facility. Shout out to Nick Major. Always good to visit friends who can't make it out to see you, especially for health reasons.

When I returned to Ferg's, it was slammed with people. Only an hour and a half remained before game time and people were flocking to Fergs for fermented hops and barley and fine pre-game cuisine. I slide back in my spot outside the bar and set up my book array.

Marketing The Man Makes You Work as "the funniest book you've never read", more people bought my first book than bought Curveball at the Crossroads. Albeit Curveball at the Crossroads is $20 and The Man is only $5, but I thought people's interest in the latter over the former was interesting. People don't mind supporting for a few dollars, but if you get into their beer money, then you may sell less books.

Perhaps the most interesting patron I talked to during the game was a man who appeared to be homeless. He wore rough clothes and wasn't carrying himself well. He looked through my books and then dug into his pocket and gave me a dollar. Then he walked away. I can't give books away for a dollar, but he also didn't give me the opportunity to give it back to him. So appreciate the support.

Sales slowed down dramatically once the game started. From first pitch to the final out, I think I might have sold one copy of Curveball at the Crossroads and one copy of The Man Makes You Work. But that is to be expected when most baseball fans are inside the bar or inside the adjacent stadium. But this is when I had lunch, a few beers, and watched the game on an outside TV, all of which is what I would be doing anyway when the Rays game is on.

After the game ended, I knew I had to be ready. Rays fans were in a good mood, there was alcohol in many people's bloodstreams and a generally good mood was in the air.

Soon after the final out, folks started gathering at the long bar where I was stationed. I immediately made a few sales of The Man Makes You Work. Then I sold a few more copies of Curveball at the Crossroads. One group of patrons sat by me and were reading The Man Makes You Work aloud, laughing amongst themselves. Awesome advertising.

All in all, Saturday was a fantastic day for book selling. I walked away with over $150, after buying a few beers, lunch, and parking. It was the best day I have ever had for book sales. That makes me feel like this endeavor is worth it. Creative writing and selling books is so much different from my day job that it is a fun and welcome hobby. When it pays decent, it is even more fun.