Are Chris Archer attendance comments prelude to a ticket deal?

On September 28, 2010, former Rays pitcher David Price made an off-hand comment on twitter about Rays attendance. According to a screen shot on The Big Lead:

On the same day, Evan Longoria also made comments on attendance.


Longoria, who did not play in the Rays' 4-0 loss to Baltimore, spoke at length about the team's chronically low attendance, calling it "disheartening" and "embarrassing."

"We've been playing great baseball all year. Since I've been here in [2006], the fans have wanted a good baseball team. They've wanted to watch a contender," Longoria told reporters. "And for us to play good baseball for three years now, and for us to be in a spot to clinch again and go to the playoffs, we're all confused as to why it's only 15,000 to 20,000 in the building."


Following these comments, then-Team President Matt Silverman stated while the team had considered giving away free tickets prior to the comments, the players' statements made the decision clear. According to ESPN,


Team president Matt Silverman said the club had been discussing the possibility of giving away tickets for the Rays' home finale, but probably wouldn't have actually done it if the players hadn't spoke out.

Fans, pundits, and prognosticators have pointed at the stadium issue, the roster, and the continuing Tampa Bay Lightning schedule. All of these probably have some effect. The only thing we can prove without polling is the Lightning effect, but every factor probably does have some credence.

Chris Archer is no dummy. He is quite possibly one of the smartest, savviest, and publicly visible Rays players. While developing into the Rays ace and one of the best pitchers in the American League, he is also known for helping kids at schools, making public appearances, and being a spokesperson for the team.

Behind Evan Longoria, Chris Archer is the second biggest face of the team.

Yesterday, Archer followed the footsteps of Price and Longoria and made a twitter comment about the Rays recent attendance.


Strange that we don't draw more of a crowd. "12,000" last night. The Yanks usually pull more than that in Tampa, lol. Thx to those who came.

But the bigger picture: Archer is a smart guy. He wouldn't make these comments without knowing they would be read. He knows fans and media are reading. Some fans replied and had an interesting back and forth with him. 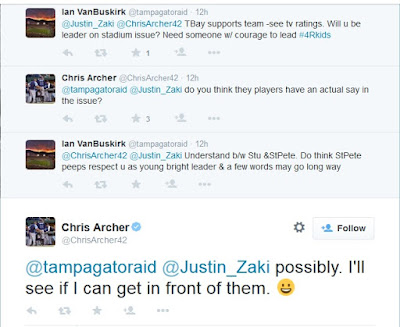 I'm not sure what Chris Archer would accomplish in front of the St. Pete City Council, but it is interesting to read a player's thoughts about his impact on the politics of the city.

But let's return to his attendance comment. Initially, I didn't think Archer should have tweeted what he did. He should have only tweeted his thanks and not mentioned attendance. That would have been the smart, publicly safe thing to do.

Unless there is something else going on. Maybe Rays management is planning something and needed a player to spark conversation.


Though the Rays can't repeat the open-seating option due to season ticket commitments, they should find a way to offer some kind of deal. Especially to boost the total on unattractive midweek dates, such as Thursday's announced gathering of 8,701 (lowest at the Trop since the Devil Rays days of 2007), likely more around 5,000. Assuming they want to.


Topkin is as "in" as any Rays reporter. For him to talk about the Rays business model is telling. Where there is smoke, there might be fire. Perhaps, like in 2010, the Rays front office is actually discussing the idea of a ticket deal. Maybe they are discussing a salve to the wound, especially as it comes to the beating they are taking in the Tampa Bay sports market at the hands of the Lightning.

Using a player to spark conversation is an interesting tactic. Remember, Price or Longoria faced no long term repercussions because of their comments, comments which led to free tickets. So I doubt Archer will face any negative backlash. If asked for comment, the Rays could mention that Archer is a young, emotional player who tweeted without thinking.

Perhaps Archer's comments were orchestrated by the Rays front office. Perhaps Rays management will use this "incident" to save face and give away or slash ticket prices without actually pointing a finger at another local sports team. If so, this is not a very orthodox or honest way of dealing with fans, but perhaps it is "The Rays Way".
on May 15, 2015
Email ThisBlogThis!Share to TwitterShare to FacebookShare to Pinterest
Labels: ATTENDANCE, Front Office, TAMPA BAY RAYS
Newer Post Older Post Home